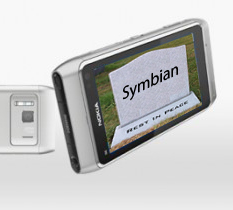 Nokia’s flagship phones, the N series, are about to undergo a change. The next in line, the N8, will be the very last N series device to run Symbian OS. From the N9 onwards, N-branded devices will run the Linux-Foundation-backed Meego.

Despite the illustration to the right, Symbian is heading for the evergreen pastures just yet: Symbian^3 (and ^4) will still be used on Nokia’s X- and E-series phones, while C series phones will use Series 40.

By pushing the “^” variants of Symbian a little further down the product line, Nokia is making its feature phones smarter, which will be a good thing for both Nokia and the consumer.

As for Meego? Well, it looks promising, but we’ll have to wait and see if it will be able to compete with Android and it’s population of eager developers.