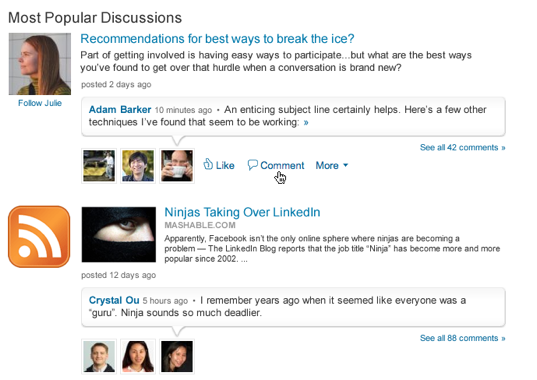 On the heels of reaching the 70 million member mark, professional social network LinkedIn is adding new functionality to its Groups feature on the site. Launched last August, Groups essentially allows anyone on the network to create an open forum around a specific subject or profession where users can comment and share news and information. Currently there are over 650,000 groups on LinkedIn, with the largest amassing 200,000 members (for an E-Marketing Association).

Today, Groups has undergone a bit of a facelift. LinkedIn has improved the look and feel of the Groups feature, making threaded conversations within groups similar to face-to-face professional interactions by removing the wall between original remarks and off-site content such as news articles. You can share links on Groups the same way you would on the homepage. And your profile picture will now be attached to any comment you make on a group, personalizing the experience.

You can also now roll over the images of the last three participants on any thread to see comment previews and click their profile pictures to jump to their part of the conversation. If you are new to the thread, you can easily view an entire discussion by clicking the discussion headline or “See all comments” link, which will tale you to the beginning of the discussion.

One of the significant changes in the the groups experience is the ability to curate new content and vote on shared content by liking and commenting on discussions with a “like” button. Content that is “liked” will be highlighted. You can also see who has liked a conversation to get a sense for topics that group members are gravitating toward.

Group members can now get email alerts when select members of a group participate by simply following a member within the group. The following feature was originally added to LinkedIn a few months ago. And LinkedIn will begin to highlight active group participants as “top influencers,” which designate the the member whose contributions stimulate the most participation from other group members.

LinkedIn’s principal product manager Ian McCarthy says that overall, Groups has been upgraded to be more engaging with users and a place where people can have conversations on the platform. The interface looks almost like a Facebook or FriendFeed, which isn’t surprising considering that LinkedIn has taken inspiration from other social networks for some of its features.

The network has been adding social features continuously over the past six months to broaden LinkedIn’s reach across the web, including adding a deeper Twitter integration, adding the ability to follow, and enhancing sharing options.