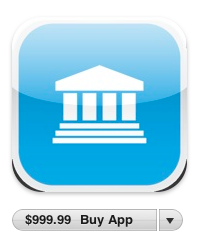 When we first wrote about BarMax in January, there was a lot of interest in the iPhone app for one obvious reason: it cost $999.99. While it may not have been the first $1,000 app (the useless gimmick app, I Am Rich, can claim that title), it was the first to seemingly be worth the high price tag. Apparently, users have agreed. As the app meant to help law students pass the bar exam is already profitable and ready to roll out a version to cover another state: New York.

The first BarMax was specific to California because each state has different bar exams. This second version will cover New York’s version — effectively doubling the number of people who will find the app useful. Between those two states, they’ll have almost half of all bar exam test takers covered, company chairman (and the guy behind the original idea), Mike Ghaffary, tells us. To be clear, this latest version will be a separate app from the first one (called BarMax NY), but that’s just as much because of app size limits — these apps have so much information in them that they’re over 1 gigabyte in size.

As I said above, the California version has done very well. Ghaffary says that over 100 students have downloaded the app so far. That may seem like nothing, but remember, we’re talking $1,000 here. That means the app has rung up over $100,000 in sales — in case it’s not clear enough, that’s the same as a $0.99 app being sold 100,000 times. In fact, these 100+ sales have been enough to make the entire venture profitable, Ghaffary says.

And the students who have downloaded BarMax clearly like what they’re getting for their money: the app has a 4.5 star rating in the App Store (out of 5 stars). Why are they so happy with a $1,000 app? Because it’s anywhere from 1/3 to 1/4 of the price of its main competitor, BarBri, which has dominated the bar exam test prep space for decade. Clearly, they’re shaken up by BarMax’s entry into the field. And again, BarMax was just in California so far, with New York in the mix now, they’ll have a whole other reason to worry.

And BarMax isn’t stopping there. With the money they’re making, they’ll be extending to other states as well. Next in the pipeline are Illinois, Texas, and Florida, Ghaffary says. They’re also hard at work on an iPad-specific version of the app, built from the ground-up. This will take a while to build out, but Ghaffary expects huge things from it when it’s ready.

Ghaffary also notes that not only is Apple comfortable with the pricing of BarMax, “they love this thing.” The fact that they’ve featured it in the App Store in recent weeks seems to prove that. Last week, the $1,000 app was #6 in the What’s Hot area of the App Store, and it’s the #36 in top grossing apps, Ghaffary says. And that doesn’t count the thousands of users who are downloading the free ethics exam (a separate exam you have to take) version.

Some of you may have read about the incident of a kid accidentally buying the $1,000 app. Ghaffary says they were ready to step up with a refund, but Apple beat them to it.

BarMax NY was submitted late last week to the App Store for approval, look for it soon in the store. Meanwhile, you can find the CA version here — but don’t click to buy by accident.