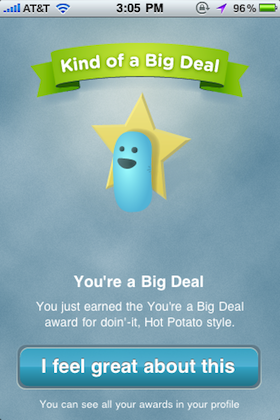 When Hot Potato launched at our Realtime Crunchup last November it was already a solid app. Then came a new version in March (just before SXSW), and it was even better. Today brings version 2.0 — and it’s the best yet. And it’s also different.

When it first launched, Hot Potato was basically an iPhone app that let you build a social stream around events happening at any given moment. Right before SXSW, the newer version of the app added killer Foursquare integration, and tied everything together with the service’s website. The update today shifts the focus away from events, and makes it about all kinds of activities. Really, anything in the world you may be doing, you can now “check-in” while you’re doing it on Hot Potato. It’s actually pretty cool.

When you load up the app, you’re taken to a screen with six default prompts for what you may be doing. Those six are: “I’m watching..”, “I’m listening to..”, “I’m attending..”, “I’m reading..”, “I’m thinking about..”, and “I’m playing..” After each, there’s a box to fill in the noun that should follow each of those. When you enter that, Hot Potato searches to see if it’s already in the system. So, for example, if you say, “I’m watching Lost”, Hot Potato finds the other people doing that as well and ties you altogether into one activity.

Within this activity page, people can comment and respond to comments about the activity, just as you previously could in Hot Potato. You can also add pictures to this stream.

There’s also a seventh activity option in which you choose your own verb. Hot Potato gives you a list of new options (such as “I’m eating”, “I’m drinking”, “I’m checking out”) — or you can add your own. This reminds me a bit of the service Plurk, which is a Twitter-like service that allows you to organize your status updates around verbs. But obviously, this is more robust.

Just as before, when you fill out what activity you’re doing, you can send it to Twitter, Facebook, or use it to check-in on Foursquare. The way Hot Potato has set this all up is quite seamless. And there is of course an activity stream front and center in the app to showcase all of your friends’ activities.

There’s also a new element: awards. Yes, just as with some of the other location-based services, you can now get badges for doing certain activities. For example, when you share your first activity, you earn the “You’re a Big Deal” award.

Hot Potato 2.0 also brings a revamped version of the website to match this new activity focus. And for the first time there’s an iPad app as well.

We’re already seeing a ton of Foursquare-like services that let you “check-in” when doing various things. For example, Miso lets you check-in around movie, television, and Internet video content. This new version of Hot Potato aims to let you check-in no matter what you’re doing. And it smartly ties in with Foursquare.

Find the new version of Hot Potato in the App Store here. It’s a free download. 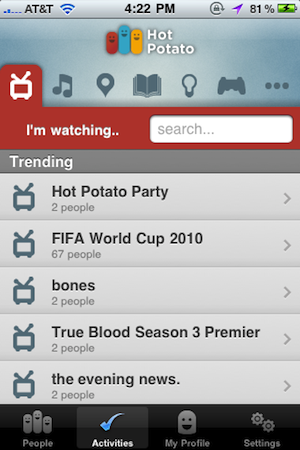 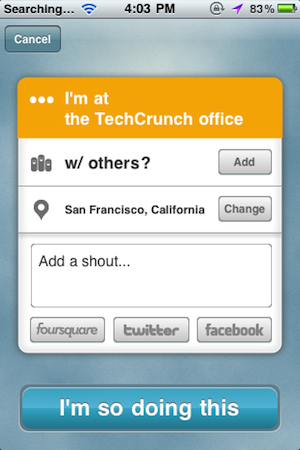 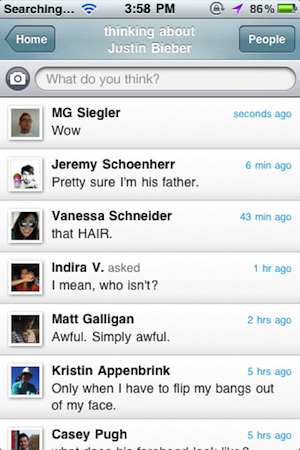 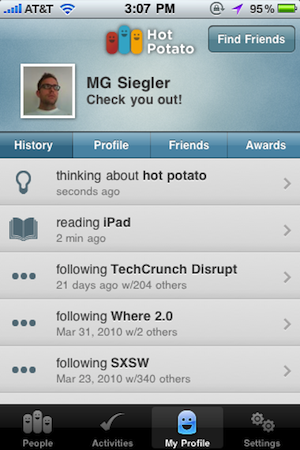