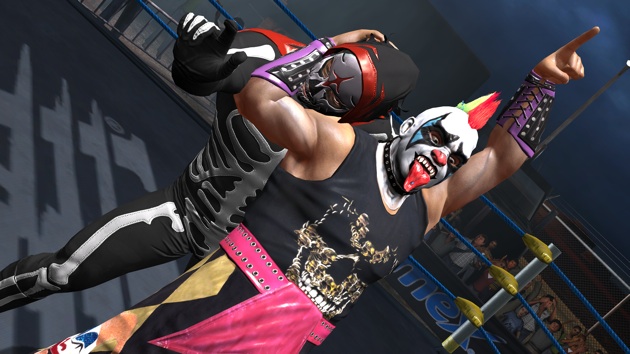 Rather than use E3 to pile on the mountains and mountains of hype of the big-budget titles, I’ve elected to sprinkle through our coverage the small little gems that might otherwise go unnoticed. First on the docket is AAA: Héroes del Ring a lucha libre (Mexican-style higly-flying pro-wrestling) game that’ll hit your Xbox 360, PS3, Wii, and PSP on August 10 of this year. I had some quality time with it this morning and I can say this: I left the booth absolutely shocked at how thorough the game is.

The game, developed by Immersion Games and published by Konami in the U.S. and Slang south of the border, lets you play as one of 30 luchadores from Mexico’s AAA promotion. (AAA is sorta the WWE of Mexico.) All the big names are there, from Konnan to Cibernético to La Parka—that’s AAA’s La Parka and not LA Park, mind you. Or, if you want to create your own luchador you’ll find an incredibly detailed create-a-wrestler mode. You can customize your guy’s physical characteristics to your heart’s content (you can even create your own mask!) as well as their move-set. Very much reminds me of the golden days of Wrestlemania 2000 and No Mercy on the N64 back in the day!

Controls also remind me of those games. Everything revolves around your luchador’s popularity. In order to use your guy’s big special move you need to build up said popularity meter, which you do by striking your opponent, taunting your opponent, etc. There’s weak and strong grapples: weak grapples lead to weaker (but quicker) moves, and strong grapples lead to stronger (but slower) moves. Pretty easy to follow.

There’s a story mode that you can play, either as a técnico (babyface or “good guy”) or rudo (heel or “bad guy”). The storyline, naturally, is different depending on you’re técnico or rudo. In the build I was shown, Konnan, featured in a recent outstanding Wrestling Observer bio, narrates the cutscenes.

There is, in fact, a mask vs. mask (or mask vs. hair) match mode. If you lose your match or hair in an online match, you’ll have to win three ranked matches to get your mask/hair back. Phenomenal.

The game has the authentic AAA commentators for the Spanish-speaking audience as well as English commentators, which I believe will also be Konnan. The point is, the game’s developers thought to include English dialogue (again, in addition to Spanish) throughout&mdas;that’s pretty key if the game is to do well here in the U.S.

So yeah, like I said, walking in to the game this morning I though, “Meh, hopefully it’s halfway decent.” I’m pretty sure I can say it’s quite a bit better than “halfway decent.” It’s fairly arcade-y (as in a single big punch can send one guy over the ropes), but then again lucha libre itself is pretty arcade-y, too.

Pleasantly surprised by this.