It’s been no secret that social network platform Ning has been going through a significant transition in both its leadership and business model in 2010. In March, longtime CEO Gina Bianchini was replaced by COO Jason Rosenthal. And in April, Ning’s bubble burst — the company laid off 40% of its staff and killed off its free service. In May, Ning rolled out the different paid models for its platform, Ning Pro, Ning Plus and Ning Mini. And June brings new revenue streams for Ning’s social networks, in an effort to help Ning users monetize their social networks.

Ning is announcing two partnerships, with branded product creator CafePress and social gaming startup Heyzap, to offer monetization options to Network Creators. Custom CafePress shops can now be integrated directly into Ning Networks, offering creators the opportunity to sell branded products, like mugs, t-shirts and more, to members and fans. With Heyzap, Ning creators can add Heyzap pay-to-play games onto their networks. Creators will earn 10% of all revenue from premium game purchases. Ning has also partnered with Chipin to allow non-profit creators to raise funds and collect donations from members. A number of networks have already been experimenting with the new channels, including The Veloist, Duke City Fix, and TuDiabetes.

Of course, Ning is taking a cut of any revenue made through these channels (with the exception of funds collected through Chipin), but Rosenthal assures us that this cut is small and the majority of the revenue goes to the network creator. These revenue channels join Ning’s Run Your Own Ads option that allows creators to collect revenue from running display advertisements in their sites.

Rosenthal adds that this is the beginning of a string of revenue channels that Ning plans to open up for network creators. While he declined to name any future channels, he did say they would be in the areas of e-commerce, gaming, group buying and more. Rosenthal added that they would be exploring any channels that are currently working on other similar platforms.

It seems safe to infer that he probably meant channels that were working on Facebook, which could mean that Ning may get into the offers game as well, considering its success in social games and applications on Facebook.

It’s clear that Rosenthal seems to have big plans for Ning when it comes to revenue for the network and its creators. He has told us in the past that the DIY social network arena focusing on subscription model could represent a $4 billion plus revenue stream. It should be interesting to see if Ning can capture a portion of this anticipated cash. 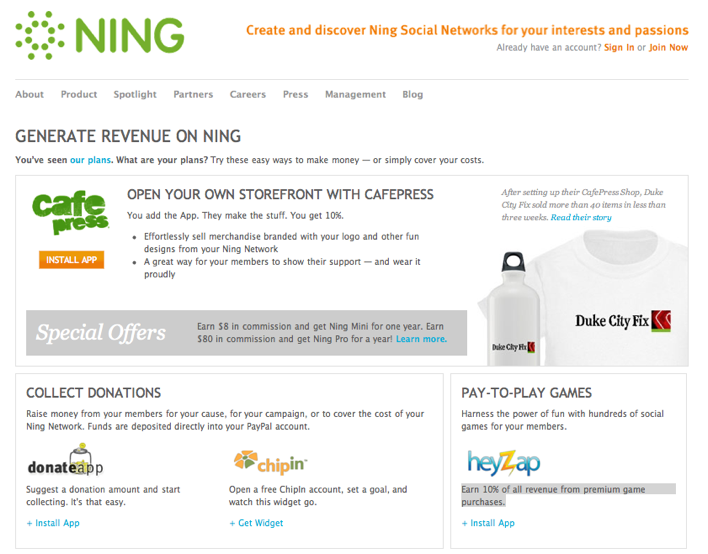