Tonight at 8PM EST, President Obama will be holding a special press conference to discuss the ongoing Gulf oil spill crisis. The event will be broadcast on all major TV networks and live streamed on YouTube’s White House Channel, and will be followed by a special twist: White House Press Secretary Robert Gibbs will be taking to YouTube to answer questions that have been submitted by the nation.

The White House has just embedded a Google Moderator form into its YouTube Channel, inviting users to submit their questions about the oil crisis. Through Moderator, you can vote up the best questions, and Gibbs will respond to them fifteen minutes after President Obama’s speech tonight ends.

This isn’t the first time the White House has turned to YouTube to more directly respond to the nation’s questions — in February it held a special interview with President Obama, where he was asked questions submitted by the YouTube audience. 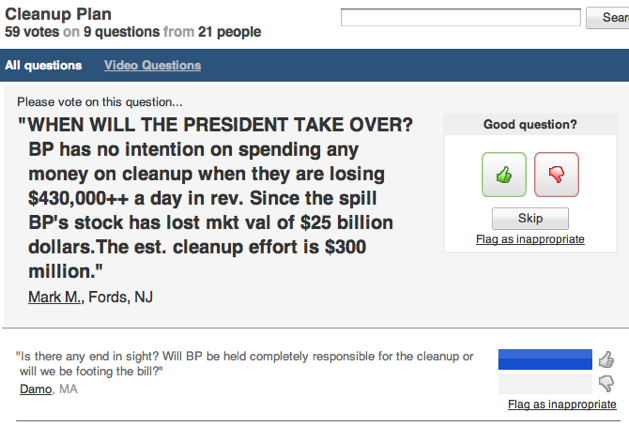