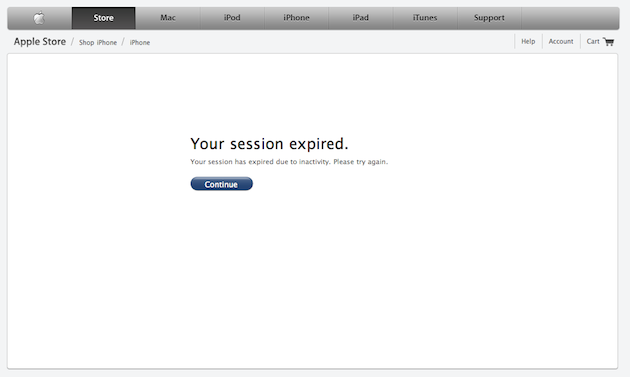 You’d think 1 AM PT (4 AM ET) would be a pretty safe time to put something up for pre-sale. You’d think that — and you’d be wrong.

As we’re seeing tonight with the iPhone 4 pre-sale, there doesn’t appear to be a safe time to avoid Apple fanboys. Apple and AT&T’s online purchasing system for the new phone has been a complete and utter failure for the past hour. Judging from comments, tips coming in, and personal experience, most people don’t even seem to be getting past the first step of entering their existing AT&T information when the system simply times out.

But there’s hope. I’m told that if you order the phone through AT&T’s website, it appears to be working. The downside there is that rather than having the option to pick it up in-store, you’ll have to have it delivered to you on the 24th.

This is all a bit reminiscent of the iPhone 3G launch two years ago when an AT&T activation failure prevented people from walking away on launch day with working iPhone (and delayed others by hours in some cases). You’d think they’d have this system down by now.

Who knows, maybe either AT&T or Apple caught a bit of whatever Twitter had earlier. And just imagine if they white version was actually available to pre-order too!