This story fascinates me on so many levels. Here are the basic facts: Zynga has been moving its games off of the Tagged social network and encouraging users to migrate to Facebook. Earlier this month Zynga gave out a special code to Mafia Wars users on Tagged that would give them $120 worth of currency on Facebook when they completed the migration. But Zynga didn’t cap the number of people that could use the code, and the form for entering it didn’t give users much of idea what it was for anyway. So word spread, and tens of thousands of users entered the code and grabbed the loot. Somewhere around 100,000 people used the code.

When Zynga realized what was happening they shut down the code. But then they went one step further and rolled back the accounts for every user who entered it at least 24 hours, removing the free currency but also deleting any actions the users took to move their accounts forward during that period. Users complained on the Zynga forum but those complaints were deleted. Zynga also posted the notice below on their forum and then later deleted that too. 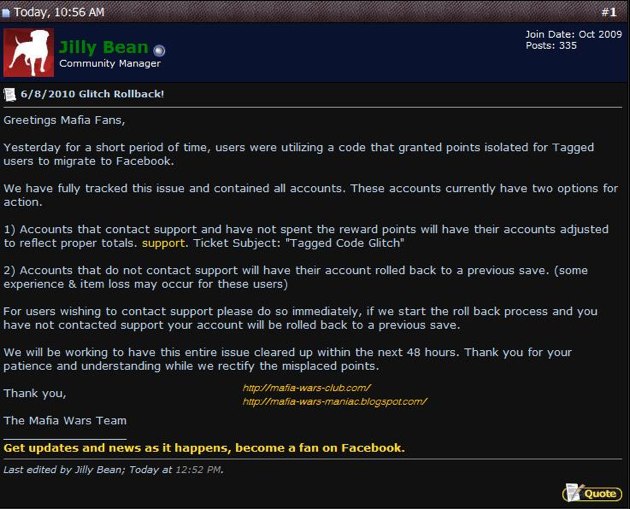 When Zynga continued to ignore users they started emailing us instead. Emails thousands of words long came in containing the kind of bitter passion that you usually only see when we say something mildly critical about the iPhone. Some users are saying that they are going to do a credit card charge back on money they’ve previously spent on Zynga games. Others say they’re leaving to try one of the many competitors. Etc.

What really seemed to make the users angry is the tone Zynga used in communicating with them:

Your account was determined to have attempted to use an unauthorized redemption code that would result in $120 worth of Reward Points.
As a result of this action, your account has been reverted to its status as of 5am PST on Tuesday June 8th.

Our records indicate you have redeemed Rewards Points using an exploit. Please note that future use of exploits may result in disciplinary actions, up to and including the permanent banning of your account.

We will keep your account active at this point, but have rolled back your account to 06/08/2010, the date prior to the redemption of these unauthorized Reward Points.

If you have any questions, please email taggedcodeexploit@zynga.com. We will respond to your inquiry in 72 hours.

Thank you,
The Mafia Wars Team

Remember that this is just fake money to buy fake stuff on Mafia Wars that costs Zynga nothing to create. The code was created by Zynga and distributed without any technical restrictions on its use (meaning anyone could use it).

In other words, Zynga screwed up. But it didn’t really cost them anything since it’s all virtual goods. It seems like the smart thing to do would be to simply turn the code off and move on with their lives. But instead the Zynga team really seemed to think that they had been wronged by their users, and took proactive steps to punish and frustrate them. Instead of seeing passionate users engaging with the game, Zynga saw people trying to take advantage of them and responded by going on the attack. Terrible move. These are your customers, not your enemies.

Another observation: Zynga users are more passionate about this stuff than I thought, and while I don’t understand that it does help me understand that the science and psychology behind these games is very real. They are addictive money extraction machines.

Here’s Zynga’s official statement on this: “Last week we uncovered a technical issue with a Mafia Wars redemption code during the migration process of two of our networks. In order to protect the integrity of the game and level the playing field for the rest of the community, we rolled back those involved users to a previous save. Less than half a percent of Mafia Wars players were affected.”