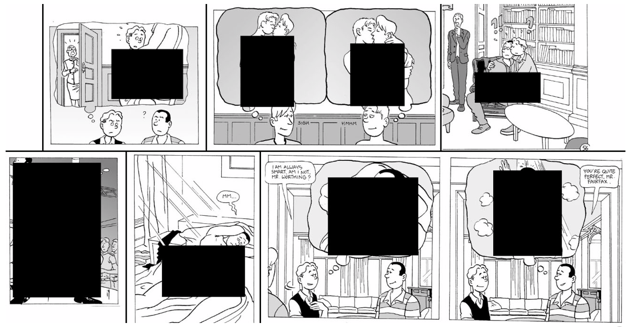 In the last few days, a pair of stories have emerged illustrating the issues with Apple’s App Store and its potential to censor content. The latest was Apple’s blocking of an iPad graphic novel adaptation of Oscar Wilde’s The Importance of Being Earnest. According to a report in The Big Money, the application was barred from the App Store until its author added ugly black blocks to censor the illustrations of men kissing (which included depictions of mens’ buttocks, but no frontal nudity). We’ve just gotten word from Apple that they’ve reversed the decision (they say it was a mistake) and that the application’s developers can resubmit the graphic novel in its original form.

The news comes on the heels of a very similar situation involving a comic adaptation of the classic epic Ulysses called Ulysses Seen, which was blocked from the App Store until its authors removed some illustrated nudity featured in the comic. Apple reversed that block this morning.

“We made a mistake. When the art panel edits of the Ulysses Seen app and the graphic novel adaptation of Oscar Wilde’s Importance of Being Earnest app were brought to our attention, we offered the developers the opportunity to resubmit their original drawings and update their apps.”

This isn’t the first time Apple has run into similar issues — in April it was in hot water for blocking a satirical application created by a Pulitzer Prize winner (it quickly reversed the block as soon as the press caught wind of it).  Apple may not be censoring this content as a matter of official policy, but it’s clear that some of its reviewers are doing it anyway, or are at least unsure about what the rules are. And it isn’t comforting that it took the media spotlight to get these cases reversed.

Image via The Big Money.