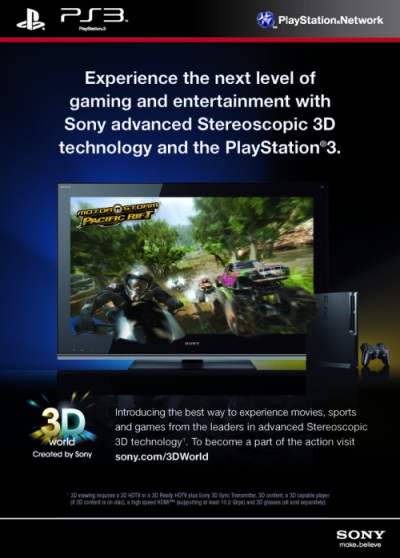 OK, Wipeout HD is a fine, fine game, but how will it look in 3D? Probably disappointing, if only because it’s going to have to be run in a rubbish resolution in order for the PS3 to create the stereoscopic image. Kvetching aside, Sony will release four stereoscopic 3D games for the PS3 tomorrow: Wipeout HD, Super Stardust, PAIN, and Motor Storm Pacific Rift. You will, of course, need a 3D TV to appreciate the extra dimensionality.

To Sony’s credit, its upcoming Bravia 3D TVs (prices start at $2,099 for a 40-inch model, so I guess we’re pretending the global economy isn’t crumbling!) come with a voucher for all four games. Think of it like a pack-in game for a console, except you’re shelling out thousands of dollars to replace that HDTV you bought only a few years ago.

I do hope Sony has these 3D TVs are at E3 next week. That way I can actually say, definitively, if 3D gaming is either A) neat or B) simply a gimmick. I’ve played 3D games here and there at various events and they were all sorta… meh. Not terrible, but not something I’d go out of my way to get. Then again, if you have the cash to burn, why not? Live it up, I say.