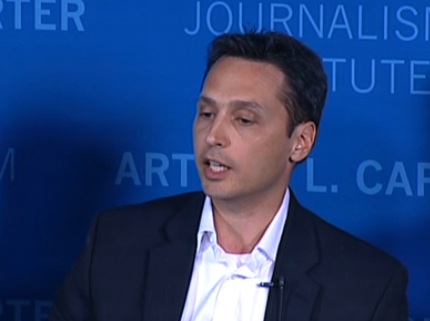 In case you still had any doubts that Yahoo and AOL are pursuing the same strategy when it comes to building a media brand online, all you have to do is listen to the two executives running the respective content businesses of each company. Yahoo Media VP James Pitaro and AOL Media president David Eun were both on a Future Of Media panel together in New York City today, but they sound like they work for the same company.

Mimicking the line his boss told us at Disrupt a couple weeks ago, Eun says, “Our strategy is to become the largest producer of high quality content” on the Internet. AOL is trying to achieve this goal by employing its own journalists (more than 500 on staff, thousands on contract), and filling in the rest with crowdsourced articles and videos through its Seed and Studio Now story assignment platforms. Eun says AOL must “find an equilibrium” between the professional journalism and the outsourced, high-volume variety.

Now listen to Pitaro as he explains how Yahoo’s recent acquisition of Associated Content, which crowdsources articles, photos, and videos from 380,000 contributors, fits into the company’s overall content strategy. “We are trying to strike a balance,” he says, between what is produced by Yahoo’s own growing salaried editorial team and the “pro-am” stuff from Associated Content. “To truly scale, you need content from the crowd,” he says.

But it’s all backfill to “round out the coverage,” says Pitaro, when Yahoo needs to assign topics like “lacrosse or local politics.” So are Yahoo and AOL becoming content farms like Demand Media? Eun doesn’t like that label. He prefers to think of it as “companies trying to produce content at scale” and using technology to do so. Both Yahoo and AOL want to create the best quality content they can, and as much as they can, using the tools at their disposal.

Pitaro explains how Yahoo got back into the original content game to begin with: “Yahoo traditionally was about content aggregation. We started building an editorial team with Yahoo Sports four years ago. Very quickly they started to break news and we saw the value of that. The leagues started taking us more seriously and started to want to license us their content. Then what we decided to do was extend into the blogging arena. So we started league specific blogs.” Yahoo began assigning articles “specifically in response to audience needs, whether it was identified through search data, clickthrough data,” or manually by editors. About 18 months ago, Pitaro expanded from sports to news, finance, and entertainment. But, “we can’t do all things,” he notes. Yahoo sales chief Hilary Schneider told the audience at the CMSummit yesterday she expects original content to go from 10 percent to 20 percent of what’s on Yahoo properties, not including the crowdsourced fare.

Arianna Huffington was also on the panel. She was asked about my story on Friday about Yahoo’s interest in the Huffington Post for a content deal and perhaps beyond that as a potential acquisition candidate. She confirmed the two companies are negotiating a new “deeper partnership,” but says there are no acquisition talks right now. (To be clear, that is consistent with my original post, which says the current talks are only about the partnership, but Yahoo’s intentions may go beyond that). Pitaro wouldn’t comment other than to say Yahoo and HuffPo have a “fantastic relationship” and “we are always looking at different opportunities with the Huffington Post.”

What was more interesting was the discussion around paywalls, which the Wall Street Journal has in place and the New York Times is planning. Huffington ripped into Rupert Murdoch, saying his complaints against Google News is all “bark with no bite.” Murdoch could have blocked Google’s access to the Wall Street Journal a long time ago (although he is blocking access to the Times of London). Nevertheless, Huffington ended the panel with a prediction: “Paywalls are not going to work.”