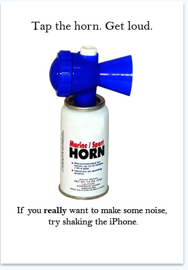 Ever wonder what a week as the No. 1 free iPhone app in the App Store translates to in downloads and ad revenues? One of the employees at mobile ad management platform Burstly created an app called Air Horn, which simply makes a very loud horn noise. The app, which had been out for over 6 months and had zero marketing dollars spent to promote it, recently hit the No. 1 spot on the Free App list.

Developed in less than three hours by Alex Miyamura, Air Horn was at the top spot for 8 days and just dropped to no. 2 this morning. Over the past week, Air Horn has made $20,000 from advertising (ad banners) and in-app purchases.

As impressions increased, so did the eCPM. The average initial eCPM on Air Horn was $2.06 and increased to an average of $2.62 over 8 days. As the app’s impressions scaled, certain ad networks started performing better and Burstly helped him optimize by prioritizing the high performing ad networks to serve the majority of the ad impressions. The click rate on the Annoying Sounds banner within Air Horn was 4.6% and the 3rd party ad network click rate averaged 3.4%.

Miyamura and Burstly CEO Evan Rifkin maintain that there is no solid reason as to why Air Horn rose to the top. One theory is that downloads increased because of the season of college and high school graduations. Rifkin does say that winning the App Lotto has shown that ad optimization works and the eCPM increased 27% over 8 days. And there’s virtue in App Cross Promotion, as evidenced by success of Annoying Sounds.

While App Horn is only one subjective example of an app’s rise to the top, it does prove that being No. 1 on the App Store’s list makes a significant difference in terms of engagement. And stats like these are always compelling because they shed light on the somewhat mysterious App Store ecosystem. But as for why a Air Horn noise app made it to the top, we’ll never know. 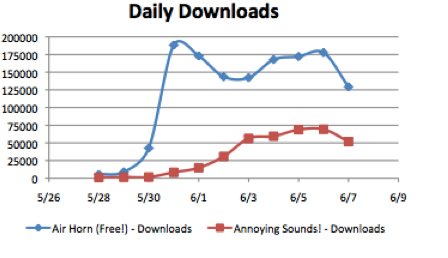