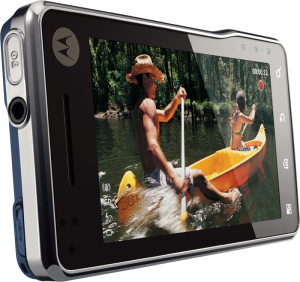 Motorola today announced their latest Android offering, the Milestone XT270, which is basically a Milestone/Droid with an updated camera, HDMI out, and no QWERTY keyboard.

The removal of the keyboard makes the device a perfectly pocketable 10.9mm thick (down from 13.7mm on the original Milestone).

The camera is an 8MP auto-focus beauty complete with xenon flash, and the ability to record 720p video.

The device runs Android 2.1, but doesn’t include MOTOBLUR, as Motorola are targeting the device at mobile enthusiasts (who, apparently, don’t want it). The upside of this is that it may mean faster Android updates in the future. May.

On the upside, the device has an HDMI type-D port on it, and — unlike the EVO — includes the connector cable in the box.

The XT720 is scheduled to be released in the EU/UK next month, with no other details on price or worldwide release available at this time.

SlashGear have a hands-on gallery, as well as a video, which I’ve embedded for you, below. The press release is available here.