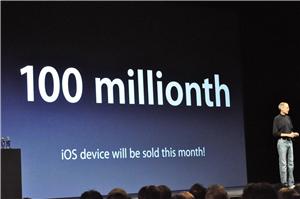 Today at the WWDC keynote address, Apple CEO Steve Jobs did a bit of tidying up. When talking about the new iPhone OS 4, Jobs noted that they were renaming the OS to be simply “iOS.” This is obviously because the iPhone OS has extended beyond the iPhone and onto new devices such as the iPad. Jobs also had a bit stat to throw out there: later this month, Apple will surpass 100 million iOS devices sold.

Jobs joked that developers have plenty of reach across their iOS platform. And it’s more than just reach. There are now some 150 million accounts across iTunes, iBookstore, and the App Store. These account all are attached to “credit cadrs ready to buy your apps,” Jobs noted.

That’s the most of any store across the web, Jobs said noting that across the stores there have been 16 billion downloads combined.