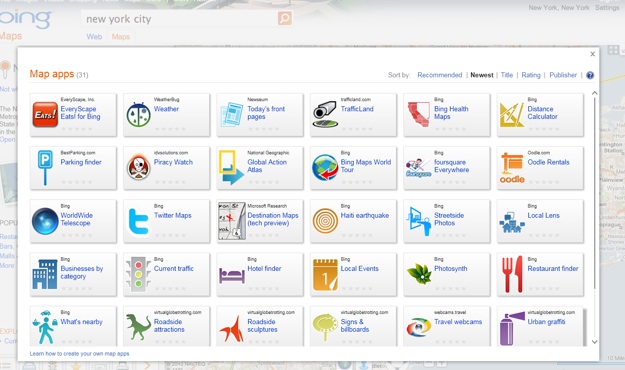 One of the best part of Bing Maps is the gallery of Map Apps (Silverlight required) which add different informational overlays to the maps. There are Twitter maps, Foursquare maps, Worldwide Telescope maps, and event maps. But today Bing is opening up its Map Apps more broadly to outside developers and releasing an SDK for anyone who wants to create their own Bing Map App.

The apps must be created in Silverlight 4, and there is an approval process before it appears in everyone’s Bing Map Apps gallery. Eventually, Microsoft will allow advertising in the apps as well and presumably will split revenues with the app creators. The apps which make it into the gallery will be showcased to all Bing Maps users.

Microsoft is launching with a few new apps built on the SDK, including ones from BestParking.com, Everyscape, and Weatherbug. The BestParking app shows parking garages and lots on the map along with a rate calculator. Everyscape is adding its collection of 3D photo exploration tools for inside buildings, starting with restaurants in select cities like Boston. And Weatherbug’s app creates a Doppler layer along with markers for each weather station, which can be clicked on for detailed info and weather cams from each station.

In addition to the Map Apps SDK, Bing is also rolling out some new improvements to its maps in general later this week. Photosynths (which meld multiple photos of a location into a huge, single, panoramic image which can be zoomed around) are now much smoother when zooming in and out to take a closer look at details. The jerky transitions are gone. Interior building maps for places like malls are also being added, so you can see exactly where the Jimmy Choo store is inside. And if you enter a business address, Bing Maps will do a reverse lookup and list the businesses at that location in the side column next to the map. 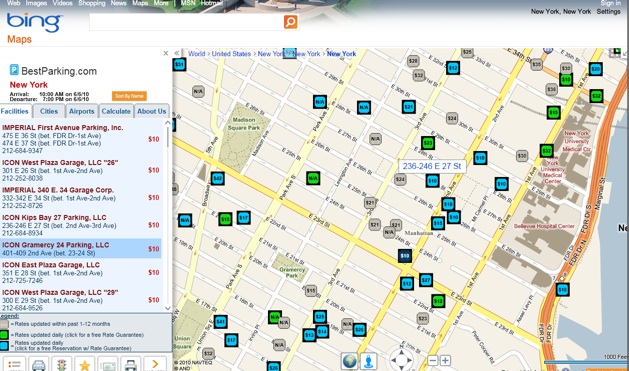