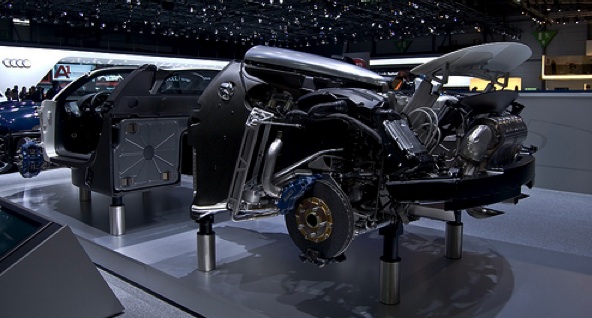 Editor’s note: Book rental startup Chegg is making money hand over fist. Guest author Steven Carpenter does a teardown of its business model and estimates its revenues will reach $130 million this year.  Carpenter was the founder and CEO of Cake Financial, which was sold to E*Trade earlier this year.  Previously, he’s written TC Teardowns on Groupon and Zynga.

Chegg may very well be the fastest-growing, most successful, second-generation e-commerce startup that you hardly ever hear about,except maybe for the fact that it’s raised more than $140 million. Chegg is the “Netflix for textbooks.” It lets students across 6,400 college campuses rent from a virtual bookstore containing 4.2 million books. Based on my analysis (which I get into more detail below), the company is on track to generate $130 million in revenues in 2010, up from $25 million in 2009, and $10 million in 2008. During the January, 2010 semester, I estimate the company made close to $1 million in revenue a day, up fivefold from $200,000/day the previous January, and it should double that this coming September. My analysis suggests Chegg will do close to $50 million in revenue this September alone. It is underappreciated, to say the least.

Chegg is disintermediating the $5B+ college textbook market by providing a low-cost, short-term, nationwide rental alternative to the high-priced university bookstore. This disruptive model will likely shrink industry revenues by half in the coming years, with Chegg in a leadership position to command 80%+ market share. The key questions, of course, are: 1) Is this a winner-take-all market, 2) What can Chegg do to fend off the likes of the major bookstore owners, Barnes & Noble and Follet, as well as Amazon and Apple, and 3) Is Chegg a harbinger of a new age of startup rental services?

Old School
The Chegg story is different from those of other breakout startups, such as Groupon and Zynga, in five key ways. First, rather than creating an entirely new industry, Chegg introduced a proven service concept and relied on established customer behavior (mail-order rentals) in an old, highly dysfunctional category, whose customers felt captive and where costs were spiraling out of control. Second, founded in 2003, the company took four years to find its business, so it was not a rocketship from inception. Third, rather than targeting a broad audience, Chegg focused on solving the pain point of a specific customer set desperate for an alternative. Fourth, Chegg, like traditional e-tailers Amazon and Zappos, requires a complex infrastructure to handle warehousing, shipping, and returns for millions of physical items, as well as a customer service desk that is highly seasonal. And fifth, because Chegg is innovating in an existing industry, the company faces rampant competitive threats from both the old guard and new entrants alike.

Not Just Extra Beer Money
According to the Department of Education, the annual cost of tuition, room and board for a four-year public institution is now $13,500, while a private university will set you back $30,400.

While college tuition costs have far outstripped inflation, having grown at an average rate of 7.74% per year since 1978, guess what constitutes the second highest educational expense for college students? Textbooks. 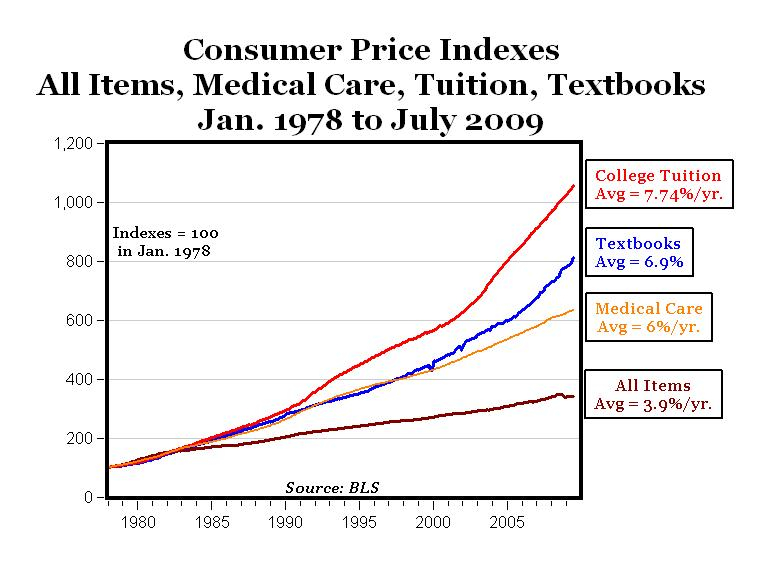 And those costs have grown at an average annual rate of 6.9% over the same time period, more than the growth of medical care expenses, causing real hardship to students who can already barely afford to put themselves through school. The issue of textbook affordability is so acute that in 2005 Congress asked the Department of Education to conduct a study on the matter and then released a plan in May, 2007 to make textbooks more affordable.

According to the National Association of College Stores, students have historically been paying nearly identical prices for both new and used textbooks. Last year, the average list price for a “new textbook” was $64 compared to $57 for a “used textbook.”

When you consider that bookstores are making significantly higher margins on used vs. new books (35.7% to 22.3%) as a result of taking advantage of students by buying back (for very little money) the very books they just sold them last semester, its is clear that bookstores have little incentive to change. Students, on the other hand, are more than ready for a more economical solution that treats them like customers.

Chegg launched its rental service in 2007 and it quickly gained traction with students. Highly dependent on the fall and spring semesters when the majority of textbook-buying occurs, Chegg saw a nearly 2X increase in traffic to its website  from Fall, 2009 to Winter, 2010.  In January, it drew 1.3 million unique visitors, according to Compete. This was 10 times more than its closest startup competitor, Bookrenter. Based on its current growth pattern, I expect to see another 2X – 2.5X increase in traffic to the website this fall.

How Fast is Chegg Growing?

Sometime in 2008, Chegg began publishing on its homepage a real-time tally of the total dollars the company was saving its customers. Thanks to screenshot captures and Google image search, I was able to put together the following chart, which shows the explosive growth the company has experienced since the beginning of 2010. The company passed the $100 million savings mark on January 11, 2010 after two years of operation and needed just an additional three months to cross $200 million in May. 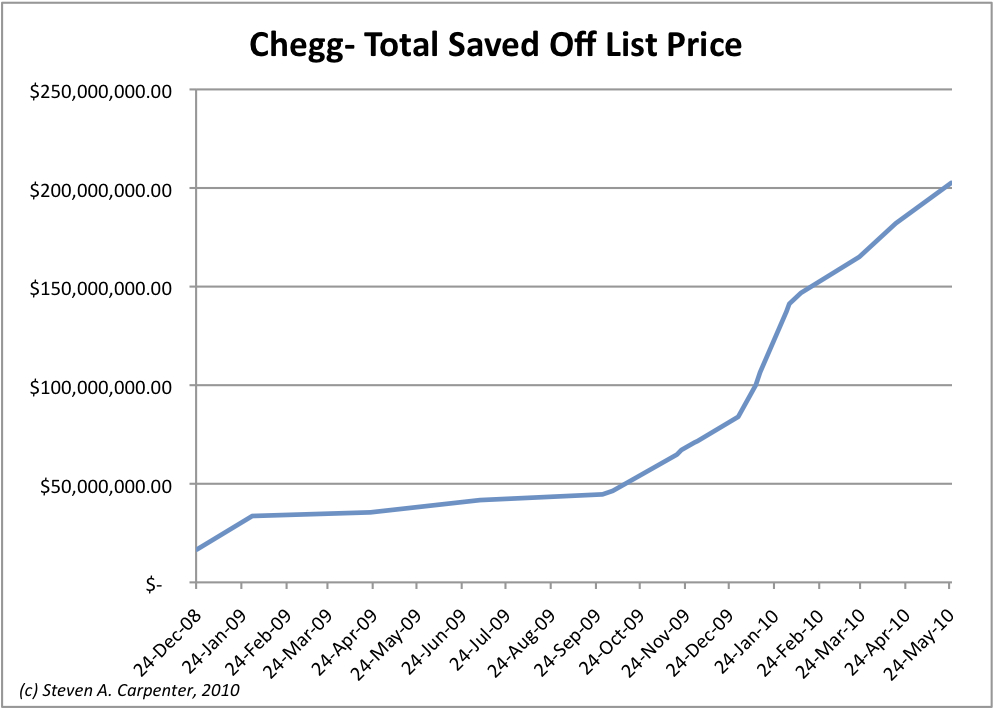 Jim Safka, the former Chegg CEO, said in an interview that the company generated $10 million in revenues in 2008.  According to a company press release, Chegg saved students just over $16 million in 2008. That means the company is saving students 63% off the list price of books and making 37% in revenue. Using this ratio, I estimate the company did close to $1 million in revenue per day during the winter semester 2009-2010, an increase of four to five times its daily average of $200,000 a day during “off peak” business days. 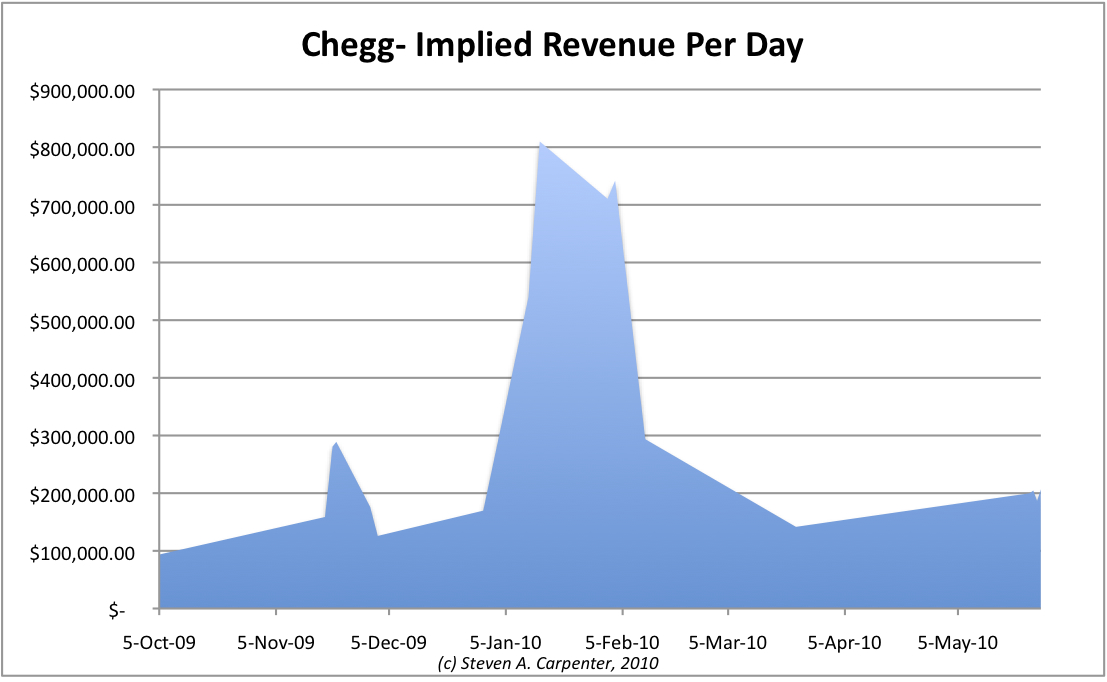 Based on this ratio, I estimate Chegg generated $25 million in 2009 and will do $130 million in revenues in 2010, accounting for increased traffic and awareness, almost half of which ($50 million) will come in September alone. 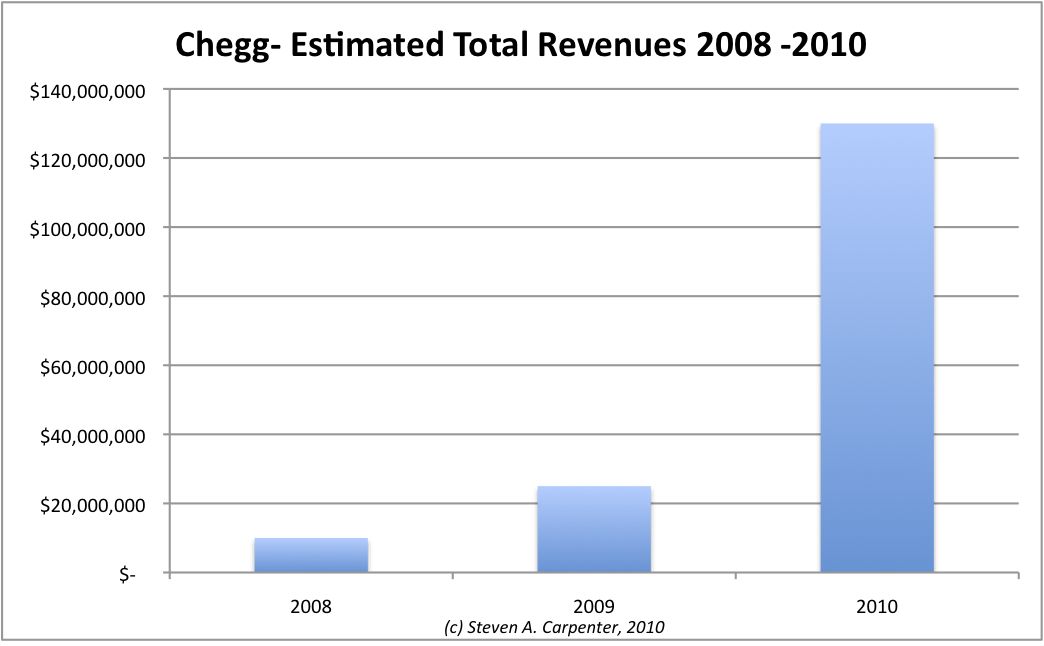 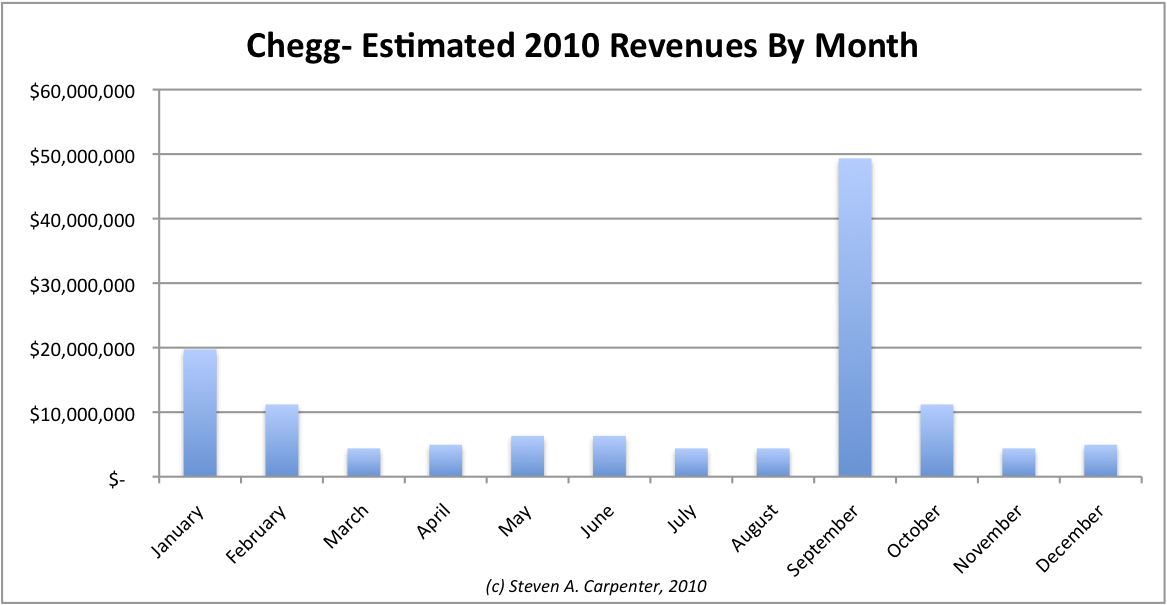 Based on my analysis, Chegg is likely operating at breakeven or at a slight loss each month, making the bulk of its profits in September and January. The reason for this is the complex and expensive warehouse and customer service operations required for this business.

Chegg hires three different tiers of employees: full-time engineering and marketing, warehouse, and customer service. Chegg needs to preserve as much flexibility as possible with its customer service and warehouse teams, so that they can be ramped up or down depending on the time of the year. When things are slow, the company still needs to carry the costs of its warehouse.

With a strong affiliate program that costs the company 8% of revenues, and its textbook buyback program, Chegg’s profitability comes down to how effectively they manage three aspects of the business: 1) textbook wholesale cost, 2) warehouse efficiency, and 3) customer service operations. These are three competencies that are very difficult to learn and mimic, creating strong barriers to entry. 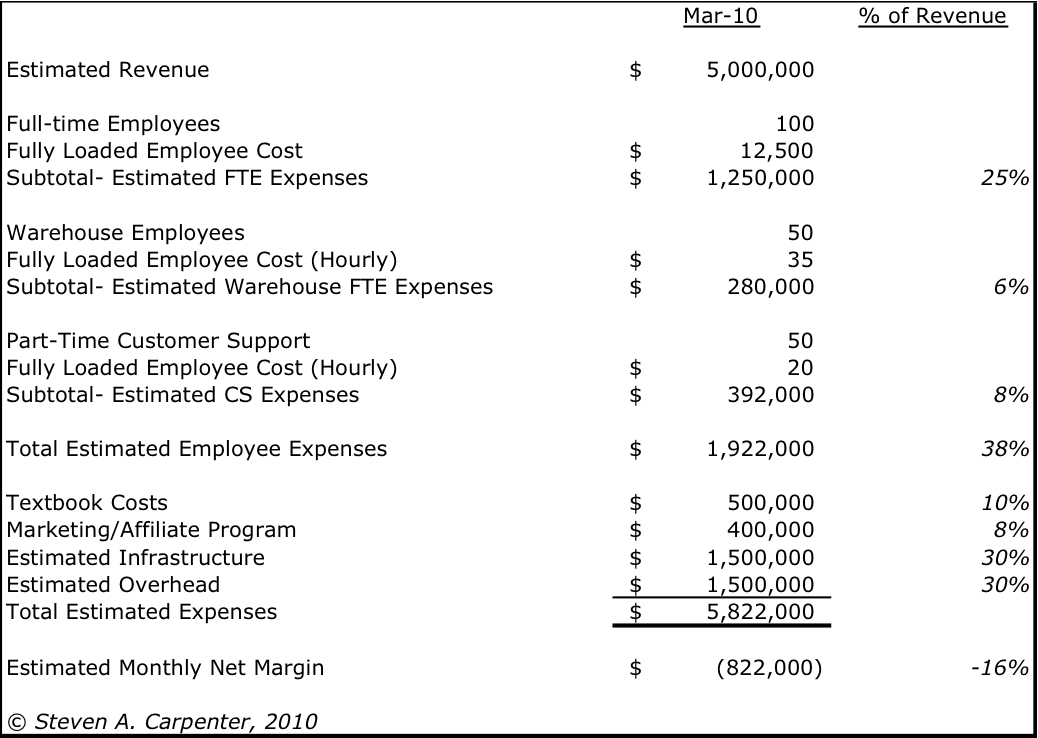 Chegg is clearly planning for continued future growth. In February, the company announced plans for a brand-new warehouse facility in Shepherdsville, Kentucky, which will cost the company $27 million and employ another 100 full-time and 1,200 seasonal employees.  Based on my analysis, Chegg will likely have to double its monthly revenue run rate to $10 million in order to cover these additional expenses. Chegg had previously raised $55 million in debt in November, 2009 to invest in this area.

Is This A Winner-Take-All Market?

The nascent textbook rental market is looking a lot like the early days of the online DVD rental business. Online-only startup, Netflix, managed to out-innovate, out-operationalize, and outlast its deeper pocketed rivals—mainly Blockbuster—that had the added advantages of a local physical storefront and customers who already rented movies!

The potential challenges for Chegg look a lot like those facing Netflix a few years ago (and a key one that does not):

But here is what Chegg does better than anybody else, which makes it difficult to compete against and win:

Based on my financial analysis above, operating a physical bookstore and running an online rental service require different core competencies. I believe this is a winner-take-all business and that Chegg should control 80%+ market share over time.

In order to further ensure its position as market leader, I believe Chegg should position itself as the “Amazon for College Students” and cater to their unique university needs. The company should also go deep into expanding its classroom offerings, such as class notes and digital goods.  Here are some other things it could do

The big question for Chegg down the line is how do they counter the cyclicality of the textbook business with more steady streams of revenue.  I’d rent a novel for $5 if there was an easy way to return it.  Wouldn’t you?