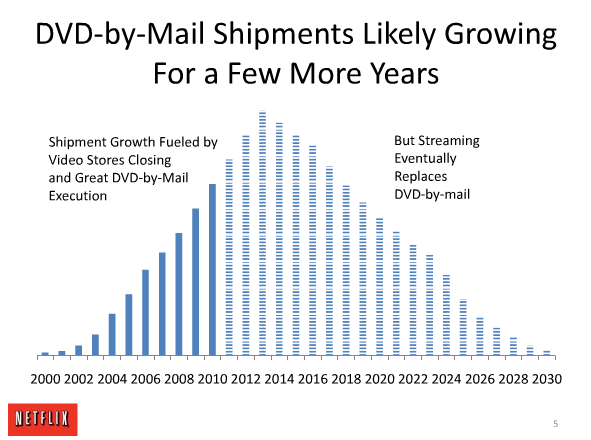 When it comes to slideshow presentations, few do them as well as Netflix. Last year, they released one that was sent around internally about their culture. If you read it, you probably wished you worked for Netflix afterwards. And now they’ve released one about the future of their business — it’s also fascinating.

The 40-slide presentation is great because it gives direct insight into Netflix’s view of its competition, and why they think they’ll succeed in the end. Long story short, they’re transforming the company from a DVD-by-mail service to a streaming video service. Anyone who has followed the company over the past year or so will know this, but it’s pretty interesting to read about just how much they’ve thought the transition through.

For example, they know there’s a demand for new release DVDs, but they’re giving up that market to competitors so that they can focus on building the biggest back catalog of movies available for streaming. They know that DVD-by-mail will continue to grow for a few more years (they think 2014), but after that, it will decline just as rapidly as it grew as streaming takes over.

Netflix doesn’t want to be the end-all source for all video content, they just want to focus on the catalog streaming ability, and exist as a supplemental service to other video services such as pay-per-view. The key to this is to make the service ubiquitous (which is why they’re focused on signing device deals) and cheap (they’re targeting around $10 per user). Once DVD-by-mail starts going away, most of their costs will be related to paying the studios to get access to their back catalog films.

So what are Netflix’s biggest concerns going forward? Hulu and piracy. Hulu, with it’s forthcoming subscription model “could be significant competitive threat for us,” notes one slide. Piracy could also be a major problem as it may become just as bad for video as it was for music, another slide notes. I’d argue that Netflix isn’t helping that by giving up on new release rentals, but it’s hard to argue with their logic about carving out a very specific, catalog-based streaming niche for themselves.

Find the full presentation below: