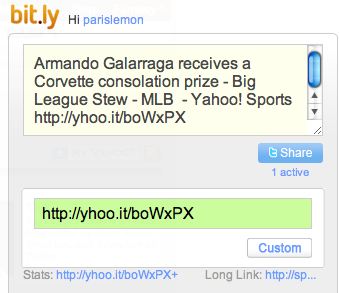 There are over 150 million clicks on Bit.ly links each day. The amount of data running through the service is massive, and continuing to grow at an incredible pace. But we’ve known that for a while. Just as impressive may be what Bit.ly is doing with its premium service, Bit.ly Pro.

Today, the service is announcing some of the huge names across the web have signed up to use Bit.ly Pro. Yahoo, MySpace, The Huffington Post, Politico, Pepsi, NPR, Scribd, Toys”R”Us, CSPAN, Dailymotion, IMDB, the New York Times, Bravo, Mozilla and Amazon have all joined in recent months. We started using the service shortly after it launched in December — those tcrn.ch you see all run through Bit.ly Pro.

There are now over 12,500 publishers and brands using the Pro version of the service, Bit.ly says — that’s more than double the number they released just two months ago. All told, there are over 1.7 billion monthly uniques for these Bit.ly Pro users.

Overall, Bit.ly hit 4.7 billion decodes (their term for clicks) in May. That’s nearly double what it was just this past February. The service is now the 76th most visited site on the web, according to DoubleClick.

Bit.ly is also announcing a new partnership today with Webtrends. Later this Summer, Webtrends will start incorporating Bit.ly data into its analytics packages.