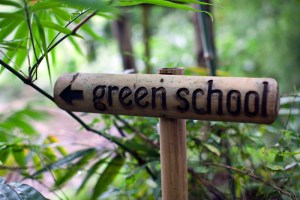 At some point or another every kid has dreamt of living in something like the Swiss Family Robinson’s tree house; even fictional children like Bart Simpson. I think I could have settled for going to school there. And—fantastical as it seems—that’s exactly what the Green School in Bali feels like.

A few weeks ago I wrote about Web and mobile technology remaking education, but in the middle of the jungle – within a cluster of bamboo buildings nominated for various architectural awards and furnished with hip, mondernist bamboo furniture – I found a place where cleantech was remaking the very concept of a school.

The toilets are almost all very comfortable compost toilets, the trash is all recycled with the organic matter going to a school pig slop where Balinese black sows make sure nothing goes to waste. Each grade has a garden that supplies organic food for lunches— including organic cacao in the summer months so the kids can make their own chocolate. The school is even experimenting with different methods of renewable energy including methane-extraction from the compost-toilets and a large water vortex that creates hydro-electric power without the environmental devastation that comes with building a dam.

There’s an inflatable classroom with a canvas roof and hip oval-shaped desks for when the weather gets too unbearable, and – why not?—a state of the art mud wrestling pit. As I wait for a Balinese latte at the coffee stand, a mother hen and her chicks peck across the soccer field like something out of a fairy tale. The third-grade’s pizza garden isn’t too far off in the distance, and even farther down the path last year’s tweens learned real-world math by building their own thatched bamboo clubhouse. And, of course, there’s school-wide wifi.

Of course all of this green stuff is just be a gimmick if it’s not backed up by high academic standards. To that end, the school runs according to the Cambridge international school standards, combining the benefits of an international school education, with the unique advantages the Green School’s environment offers.

Richard Branson was here to check out Green School last week, and before him famous guests included Ben of Ben and Jerry’s Ice Cream, Donna Karen of DKNY and David Copperfield. You can understand why the Vegas illusionist would like a school that seems to have sprung up from nowhere in the middle of the jungle.

The everyday students range from poor Balinese kids on a scholarship to the considerably-more-well off kids of a guy like Allard Luchsinger —a multi-time European Internet entrepreneur who decided to take a year off with his family in Bali. Unlike transitions to Los Angeles and San Francisco, his kids were instantly happy here, Luchsinger says. It’s not hard to see why.

This seems a school that only a wild-eyed, half-hippy entrepreneur could dream up so I’m not surprised to hear there’s not one, but two, behind it. John Hardy moved to Bali in the mid-1970s and his wife Cynthia moved in the early 1980s. Together, they started a local jewelry business called John Hardy Jewelry that caught on, selling its pieces in high-end chains like Nordstrom, Saks Fifth Avenue, and Neiman Marcus. In 2007, the company sold for undisclosed millions of dollars that go a lot farther when they are converted to Indonesian Rupiahs. (It takes just $100 to be a Rupiah-millionaire.)

Spurred by a desire to give back to the island that created their jewelry empire, the couple began dreaming about Green School. They put $5 million of their own money into the school, it opened in September 2008 and today it’s still largely reliant on donors and the Hardys themselves to keep the doors open. (Branson’s check is reportedly in the mail.) Meanwhile, the two have also opened a for-profit venture called PT Bamboo that makes the stunning sustainable bamboo architecture and furniture the showcased at the school.

Why should you care about a school in the middle of the jungle? Because that jungle shares the planet with us and Bali hasn’t always had the best track-record of environmental stewardship, having destroyed a good deal of coral with dynamite fishing in years past. Now, Green School is teaching locals a new way to think, plant and build, and is pushing the boundaries of clean-tech innovation that’s also beautiful, functional and comfortable. So frequently, we hear about emerging markets causing environmental problems, but Green School is another example of where an emerging market is creating the solution.