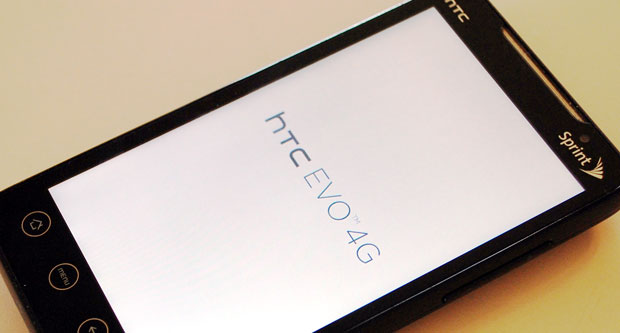 Let’s clear the air right away: The Evo 4G isn’t the second coming. It’s not the iPhone slayer. It might not even be the best Android phone available to date. But it is a solid phone with amazing hardware running the consumer-friendly HTC Sense Android release. That’s a good thing. 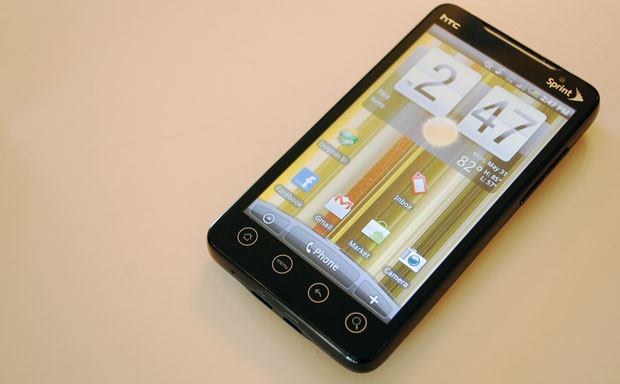 I don’t think I ever want to go back to a so-called normal cell phone now. The EVO 4G ruined me. The 4.3-inch display offers so much real estate it’s almost overwhelming — but in a good way. The screen is bright, crisp and wonderful. I never felt that it was too large or cumbersome; in fact, I felt it was perfect. It’s a great balance between a standard 3.5-inch cell phone and a small Internet tablet. Saying that the EVO 4G’s screen is too big is like saying, “No thanks, I would rather ride in the back of a cab than in your limo. I like feeling cramped and restricted.”

The bright screen counters sunlight well and it even has a great viewing angle. The touchscreen seems precise and responsive, although I’m sure some test will come out shortly showing that just how accurate, or not accurate, it really is. But simply put, the screen is great and there’s really nothing to complain about. 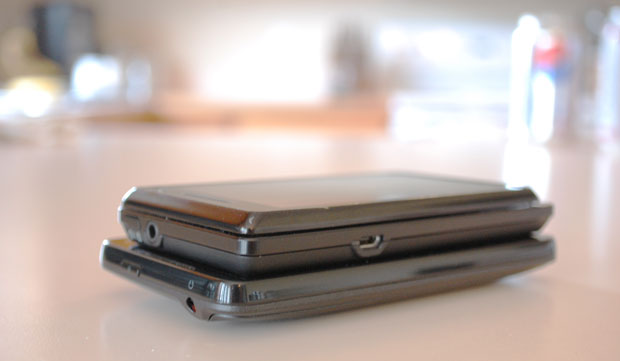 The EVO 4G and it’s slightly-older WinMo cousin, the HTC HD2, are the first of a new breed of “superphones.” These larger-screen options forgo the traditional 3.5-inch screen for something a bit more luxurious. The bigger screen can result in a thicker and therefore less portable device. But that’s not the EVO 4G. Don’t think for a minute that this larger-screen phone is any less pocketable than the iPhone or Droid. In fact I’ll argue that because the EVO 4G’s rear cover is rounded like the iPhone’s, it fits better in a pocket than the squared-off Droid. 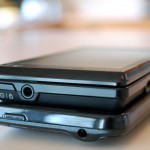 I carried around the phone for a good week and never once found it uncomfortable or too big. Sure, it feels slightly larger, but the phone is so damn thin that it’s not awkward in any way.

However, it took some getting used to when holding it up to my ear. That’s when it feels bigger. Because, well, it is although it really isn’t all that wider or longer than the Droid.

The EVO 4G feels good. It’s actually surprisingly light, but yet still feels solid. I like it a lot even thought it’s clearly a modern take on the iPhone with the convex rear panel, very clean lines, flush mounted screen and lack of buttons.

Up top is the lock button and down the right side is a set of toggle buttons. That’s it for physical buttons. The front-facing buttons are touch-sensitive and flush-mounted on the panel.

Around back is the 8MP camera and is actually one of my only gripes about the design. It sticks out a lot. The phone actually rests on the front lip of the metal housing when placed on its back. So much so that I’m actually concerned that the camera will get damaged or the metal casing will harm something else. It made a nasty sound when I slid the phone across a glass tablet top yesterday.

The kickstand is a nice touch, too. A few other early reviews talked about how it felt cheap and stated it will probably break. I don’t get that feeling. It feels solid to me. The kickstand itself is actually built into the phone itself rather than the back panel, as it looks to be in some pictures.

The back panel is held on with a bunch of little plastic clips built onto the rear panel itself. It feels a little cheap when you pry it off with your fingernail. There’s a real chance that one of the little plastic clips will break off if stressed enough, but the back panel is just a thin piece of plastic meaning replacements will probably be cheap. Oh, and the inside looks like a work of modern art. HTC knows how to make things classy.

The EVO 4G’s 8MP camera is one of the phone’s main selling points and while it does a fine job, it’s not going to replace your pocket shooter. The photos are a tad grainy, blurry and washed out — perfect for Twitpic or Facebook. The dual LED flash helps a bit and tends to fire even under good lighting conditions. Here’s some samples. 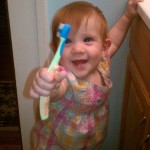 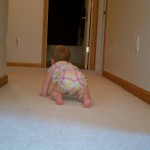 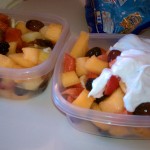 The camera actually does great job auto-focusing and firing right away. I don’t know if it’s iPhone-quick, but it’s definitely one of the quicker cell phone camera’s I’ve used, which is more important in my opinion than image quality on a mobile device. 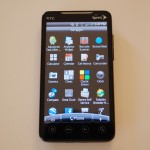 The EVO 4G is rocking HTC’s Android build, Sense. Personally I love it and find it much more enjoyable than plain ol’ Android. It brings a polished finish to the open platform and truly makes it a consumer-friendly device. But that’s just me.

A lot of people prefer a stock Android build, and for good reason, as it will likely be a while before the EVO 4G gets an official version of the latest Android release. It has to come right from HTC and the company has been slow releasing updates for its other handsets. That doesn’t mean you couldn’t do it yourself, though. A video showed up just yesterday showing an EVO 4G running the Android 2.2, although it kills Sense in the process, resulting in a stock Android look. 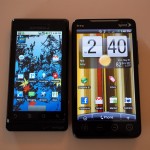 You must give a Sense-enabled phone a go before you write off Android entirely. Personally I found a stock Android build, like in the Droid, too much work. You have to download a bunch of different widgets and apps just to give the phone a friendly feel. There is no way I would give my wife a Droid. Sense is different. It’s a beautiful alternative with a lot of different customizable options built in. You really don’t have to download any apps (besides Advanced Task Killer) to complete this phone — or any other HTC Android phone like the Incredible or Eris.

Some of these apps make the EVO 4G stand out. The phone ships with a dead-simple WiFi hotspot creator. Just run the app and it quickly creates a WiFi hotspot that can serve up the internet to 8 other devices. It’s too bad that Sprint is charging $30 a month for this feature, although it does come with unlimited data (or so they say).  Don’t want to tether wirelessly? The phone can also share its Internet connection via USB. The video sharing app, Qik, is also pre-loaded on the phone. It’s a great way to utilize the front-facing camera. 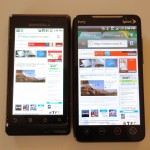 A few 3rd party apps really shine on the large screen, too. Of course games like Robo Defense and Radiant do, but Dolphin Browser HD is a must-have app for the EVO 4G. It really should be the stock browser for the new crop of large screen devices. I must say that it’s a tad slower than the standard Android browser, but it renders sites so beautifully on the large screen that’s a great trade-off. It even offers Chrome-like tabs, which are a great function and argument for the larger screen.

The phone’s 1GHz Snapdragon CPU really makes Android fly, too. The only time there is any lag or hesitation in the device is when the phone is installing an app. But otherwise, the EVO is snappy and responsive without any lag under normal circumstances.

Simply put, the battery sucks. It’s a deal breaker. I’m really sorry to say that, too. In fact it hurts me because I wanted this phone so bad, but the battery life is horrible. The phone will lose a third of its battery sitting overnight with the GPS, WiFi, and 4G turned off. Even with Advanced Task Killer set to aggressive and auto killing apps every hour, the most I can get out of the phone is about ten hours.

Take yesterday: I pulled it off the charger at 9 am, checked my mail and ESPN a couple of times during church, used the GPS navigation for 13 miles, and then checked my mail a few times throughout the afternoon while I was at a family event. The phone died promptly at 6 pm. It’s that bad.

I’ve tried a few different things like using a static background rather than a live background, turning off widget animation, disabling WiFi/4G/GPS, and setting Advanced Task Killer to aggressive. Nothing makes a significant difference. The phone just sucks the battery dry.

So here’s the problem. Power users are the ones that can fully take advantage of the large screen, but the more they use their phone, the faster it dies. The only way I can see to counter this is to plug in the phone whenever possible. When you sit down at your desk, plug it in. Drive to the store, plug it in. Go to bed, plug it in. You might want to invest in one of those instant charge battery packs, too. 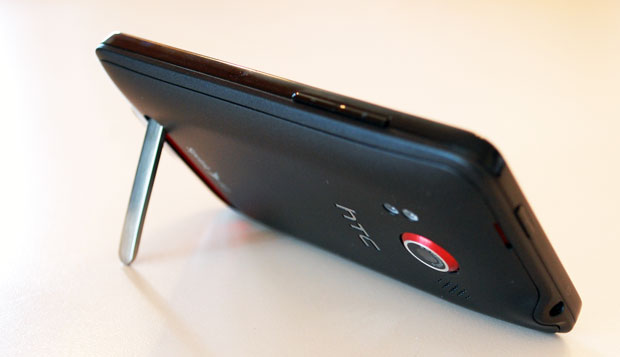 The short battery life kills the EVO 4G’s appeal. Like I said, it’s a deal breaker for me. It’s changed my phone habits. I now think twice if I really need to use the phone, as I can’t guarantee that the battery will hold up throughout the day if I use it too much. I should be able to use my phone whenever I want without worrying about the outcome if I do. I keep telling myself that I still want this phone because of the awesome screen and the Froyo Android release will cause unicorns to dance on the phone and fix the battery problem. But it won’t.

It’s a  shame that EVO 4G has such a big deal breaker. I loved this phone. I wanted to marry it, take it to Hawaii and make lots of babies with it. But that’s not going to happen. Its really short battery life outweighs all the EVO 4G’s killer feature. It doesn’t matter how awesome it is to browse the Internet on a 4.3-inch screen or do front-facing video calls if the phone’s battery can’t make it through the day. Recommendation: Use caution. 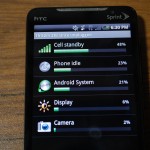 Update: Here’s the Battery Use screen for your enjoyment and dissection.