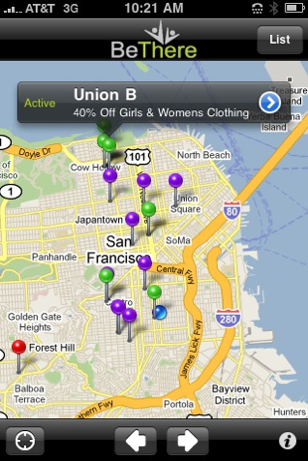 It’s no secret that mobile, hyperlocal advertising is poised to grow into a massive market in the next few years, spurred by the proliferation of GPS-equipped smartphones. Earlier this week we saw the launch of another competitor called BeThere Deals that’s hoping to crack the nut. The service offers a self-serve platform for local businesses, who can quickly deploy time sensitive deals that are limited in quantity.

While it’s focused primarily on time sensitive, local deals, BeThere Deals isn’t really in the same vein as GroupOn and LivingSocial — it doesn’t have a ‘group buying’ mechanic, and it features many deals in an area, rather than one or two. Instead, it’s more competitive with apps like Yowza!!, Mobile Coupons, and Mobiqpons.

The service is pretty straightforward: you download the free iPhone app, then open it up when you’re in a supported city to find some regional deals. At this point the service is only available in San Francisco, but it will be expanding to Los Angeles and New York City in the near future.

So how is BeThere going to survive when there are already some bigger players in this space? The company says it has a few key differentiators. First, it says that it’s primarily targeting local, independent businesses, rather than chains (they say that one goal is to make the application useful for discovering interesting new mom-and-pop stores and restaurants). Second, the application is exclusively for time-specific deals that are deployed in real-time by merchants — BeThere could be used by a local bakery, for example, that’s looking to sell excess pastries at a discount before the end of the day. The service will make money by charging merchants on a per-conversion basis.

The app still has a ways to go. For one, it badly needs push notifications — right now users have to manually open the app to see new deals, which isn’t much help when some of the deals are only available for a few hours (the startup says the feature is on the way). And the service obviously needs to get traction with users before it will be very appealing to many businesses (it’s the classic chicken-and-egg problem). The app is also going to see plenty of competition. Aside from the services mentioned above, location-based services like Foursquare have already started to enter this space.

One thing to note — the iPhone application currently has a pretty low average rating (though most of the written reviews are positive). The company says this is because users outside of San Francisco are downloading it, only to find that they can’t access any deals.