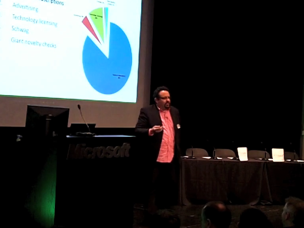 Last week at the Founder Showcase, a quarterly event put on by Adeo Ressi’s TheFunded, Evernote CEO Phil Libin gave a presentation discussing some of the startup’s key revenue numbers and strategy. During his talk, Libin outlined some of the ingredients in making the freemium model work, and how long-term users actually become more valuable over time.

Evernote, for those who haven’t used it, is a great service for quickly storing and organizing ideas, photos, documents and other information that you encounter both online and in the real world. This is actually one of the secrets to the service’s success — as people add more of their content to the site over time, it becomes increasingly valuable to them. Libin has previously shared similar information during his mentorship at Ressi’s incubator The Founder Institute

Here are some of the main points Libin covered during his talk:

We should note that Libin has previously discussed similar information, though the video provides more detail.