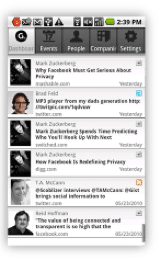 Gist, a recently launched web service that aims to organize your communication streams, has released an Android app. Gist, which offers services that help you keep tabs on the people in your professional network, allows you to see past messages and attachments from each contact, news about their company, and their recent messages on services like Twitter. The company also has a free iPhone app available on the App Store.

The Android application includes a dashboard with new, blog posts, Twitter updates, and Facebook updates for your contacts. Gist’s app will create in-depth profiles for every contacts including updates from social networks like Facebook and Twitter, mentions in the news, and email correspondence across multiple inboxes, including Gmail, Outlook and Lotus Notes. And an events tab will give you updates on meetings and information about contacts you are set to meet.

Gist, which raised $6.75 million in funding last year, launched in 2008 as a “professional” communications manager, aimed at satisfying the filtering needs of a business user. Like the web service, the app organizes your streams according to your email contacts so it’s a useful way of following your colleagues, friends and professional contacts.

The company was founded by T.A. McCann, an entrepreneur and former senior employee in Microsoft’s Exchange Server Group. It was started and initially funded by Microsoft co-founder Paul Allen’s Vulcan Capital. Gist also recently acquired Learn That Name, a game that uses your LinkedIn contacts to help you remember the names of your business acquaintances. The company also just launched a nifty gadget for Gmail.