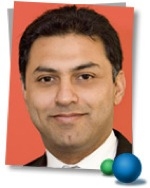 Today, at TechCrunch Disrupt in New York, TechCrunch Editor Michael Arrington sat down to chat with Nikesh Arora, President, Global Sales Operations and Business Development, for Google. Michael started the conversation off focusing on Google’s $24 billion revenue (which flows through Arora’s office), and its considerable growth in revenue since 2004 (when it hovered around $2 billion).

Michael called upon Yahoo CEO Carol Bartz’s famous quote indicating that Google is a one-trick pony of sorts. She stated earlier this year search is 99 percent of Google’s business, saying that the search giant has to grow “Yahoo” per year. Arora was quick to respond that ‘if we are a one trick pony, we have a pretty good trick.’

But it’s no secret that Google is looking at other revenue streams besides search, including Android, Video (YouTube) and Google Apps. While Arora declined to state YouTube’s revenue, he did say that there is going to be a tremendous amount of innovation around video and video advertising, stating that “online video will be a big part of our lives.”

When asked if cloud based productivity suite Google Apps is the company’s “second trick,” Arora said that Google hopes for Apps to be a billion dollar revenue stream in three to four years. Google’s forecasts come as no surprise, as the company has been aggressively lobbying enterprises and small businesses to move to the cloud.