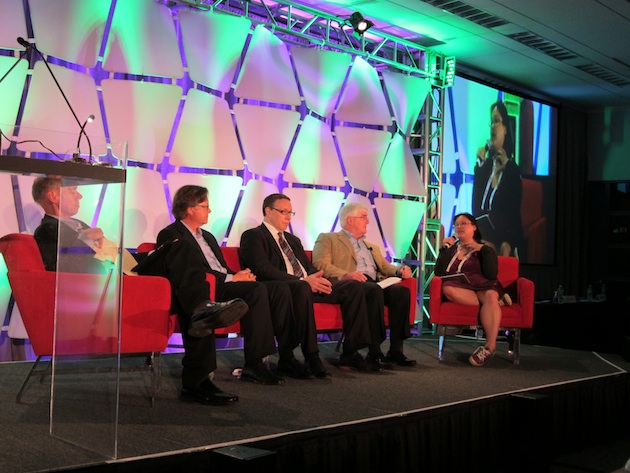 Today at TechCrunch Disrupt in New York, we had a panel entitled “Does The iPad Change Everything For News, Or Is It Still All About The Web?” The New York Times’ David Carr moderated the panel which included angel investor Ron Conway, Huffington Post CEO Eric Hippeau, and Bloomberg chief content officer Norm Pearlstine. The common theme? The only thing that can stop the iPad is Apple.

While that may sound confusing (since, of course, Apple makes the iPad), everyone seemed to agree that Apple’s restrictions could end up hurting the device in the long run. Apple is in control right now because they’re the first to market with a killer product, but others will emulate them, reasons Pearlstine. He believes a lot of the content on these type of tablets will eventually be web-based rather than app-based (similar to an argument Google co-founder Sergey Brin made last week).

Carr extended on that question, asking if maybe the iPad itself would just be a device where you consume content on the web rather than through apps?Hippeau says that’s up to Apple. Clearly they want to push people towards apps, behind their wall, he believes. The problem with this is that Apple doesn’t give back nearly as much data as having your own website would, Hippeau says. He thinks Apple will have to learn that media organizations live  off of this data. “They’ll have to open it up more,” he says.

Pearlstine agrees, saying that the key for traditional publishers is their lists of subscribers. More importantly, they have their payment information. With iPad apps, Apple has that information, and that will be a problem for a lot of media companies. “There will be other providers that won’t do it the Apple way,” he says. That, again, is implying that while Apple may have jump-started the industry, if they don’t open up a bit more, a competitor will beat them.

Of course, that hasn’t happened with the iPhone yet. But Android is charging fast.

Conway believes that Apple has a good lead for now though thanks to its “fantastic user interface.” He sees publishers flocking to it just like the music business did to the iPod/iTunes combo. “It’s a better model than free,” he says.