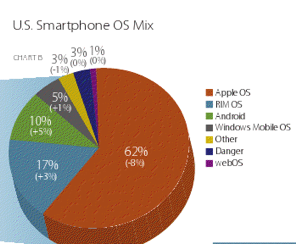 Mobile ad network Millennial Media, which claims that its mobile advertising network reaches 83 percent of 72 million mobile web users in the U.S., is reporting that Android ad requests grew 77% month over month, and have grown 282% since January. This growth is higher than the rise in impressions in March, which clocked in at 72%.

Android Smartphone manufacturer, HTC, entered the top ﬁve this month for the ﬁrst time and represented the largest increase within the Top 15 Manufacturers in April with a 2.5% impression share increase month-over-month. All Android devices, including the MyTouch (Magic), HTC G1 (Dream), G2 Touch (Hero), experienced month-over-month increases in impression shares. In terms of type of device, the majority of ad impressions took place on smart phones (45%), with Feature Phones seeing 35% of ad impressions, and Connected Devices, like the iPad, seeing 20% of impressions.

Clearly the Android is seeing impressive growth in terms of ad impressions and even sales. That being said, it still seems to be way behind the iPhone and needs a lot more ad impressions and use to even come close to what the Apple device is seeing.

Millennial has been seeing strong growth, just launching an iPad SDK, and is now one of the largest mobile ad networks in the space. The Baltimore-based startup is growing; in February Millennial Media acquired mobile metrics and analytics firm TapMetrics. Additionally, the ad network raised $16 million in Series C funding last November.

It should be interesting to see how things play out for ad networks like Millennial and competitor Greystripe with the Apple’s iAd format entering the space. And the Google/AdMob acquisition (which may be derailed) could add another formidable competitor to the party. Interestingly, AdMob also recently reported a faster growth in Android ad traffic than iPhone traffic (although, similar to Millenial’s report, iPhone OS took a greater share of traffic).