Dailyburn, formerly known as Gyminee, a social network for fitness and diet tracking, online accountability, and motivation, has been sold. IAC has acquired a majority stake in the company for an undisclosed sum.

DailyBurn will become part of IAC’s Mindspark Interactive Network, which is also is home to social and entertainment destinations like Zwinky, IWON and Girlsense, personal interest sites such as Life123 and Excite, and interactive products such as Webfetti and My Fun Cards.

From our earlier DailyBurn review:

The overall purpose of the site is to help you lose weight and gain muscle by tracking every aspect of the food you consume and your workouts, all presented in a very attractive interface. The site offers a database of thousands of foods, allowing you to quickly figure out how many calories you’ve eaten throughout the day.

You can input stats from your daily exercise regime (number of miles run, bench-press weight, etc.), so you can track your progress over time on slick graphs. The site’s social features allow users to share exercise plans and try to motivate each other.

DailyBurn currently has about 500,000 members.

The company was launched as Gyminee and debuted publicly at TechStars’ Demo Day In August 2008. The startup went on to raise $525,000 more in seed funding in a round led by FF Angel (Founders Fund), with a number of angels including Garrett Camp (StumbleUpon), Matt Mullenweg (Automattic) and Tim Ferriss participating. 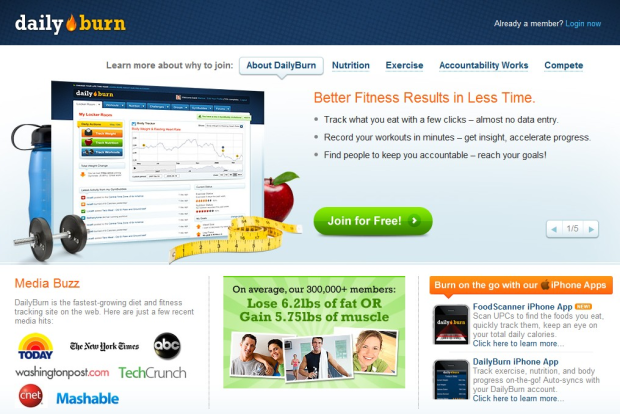