Right now at Google I/O engineering VP Vic Gundotra is going over all the new features of Android’s newest release, dubbed Froyo. It is chock full of updates, including WiFi tethering (told ya), Microsoft Exchange support, APIs for enterprise device management, faster Javascript performance, auto-updating apps, and a new way to send data from a computer to an Android phone.

The Send-To-Android feature is particularly elegant. It is part of a new device messaging API. When someone sends a map or article link to your phone, for instance, instead of sending you the link via email or SMS, it actually launches the map or Webpage being sent. Gundotra showed this feature using a TechCrunch article (thank you). It launched the page right in the Android browser after being sent from a PC browser. Same for a map.

Android’s voice commands are also getting more sophisticated. In addition to voice search, it now supports other voice triggers. If you say, “Call Fifth Floor Restaurant,” it will try to find the number and give you the option to call with a pop-up call button.

Froyo also turns your Android phone into a WiFi hotspot so you can tether your laptop to it and get access to the Internet using your cellular data connection. Froyo also includes application data backup so that when someone upgrades to a new Android they can take not only their apps with them but all the associated data. 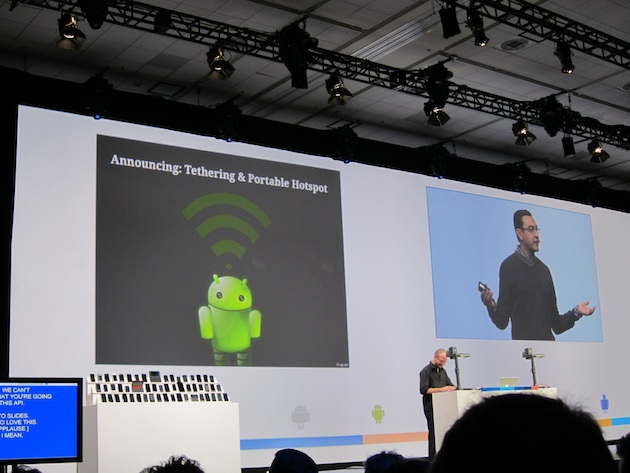 It is also much faster. Gundotra showed off a new compiler that can boost the speed of certain apps by 2 to five times compared to the current version of Android (called Eclaire). He showed a game with tons of monsters. Froyo could handle a lot more monsters than Eclaire. He also compared the Javascript performance of Froyo to the iPad using an animation of the Android robot swimming laps around the screen. Guess which robot swam laps around the other one?

Making another dig at Apple, he pointed out how Flash-friendly Android is because “people use Flash on the Internet.” Froyo supports the Flash 10.1 beta. More interesting he gave a sneak peek at a future challenge to iTunes with music downloads and syncing from your desktop. The Android Marketplace, which will finally exist in a browser version, will start to sell music which you can download over the air to your Android phone—no wired syncing required. The browser marketplace will work the same with all apps: over-the-air downloads. How did Google do it? “We discovered something really cool,” quipped Gundotra, “it’s called the Internet.”