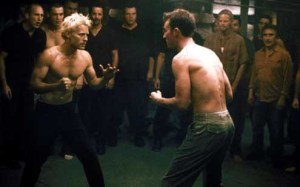 During the keynote at Google I/O today, Google took a lot (and I do mean a lot) of not-too-subtle shots at Apple. Most of this was related to Android vs. iPhone, but it also delved into something else with the new Google TV platform. At the Q&A following the keynote, someone asked the question: what does this mean for Apple TV?

Google dodged the question a little at first. Their line is that the TV ecosystem is now ready for something like Google TV (that implies that it wasn’t before with devices such as the Apple TV). But they also noted that their idea is different from Apple because they’re trying to do this in a different way. That way, naturally, is the “open” way.

Whereas Apple TV is a device and a piece of software, Google TV is just a platform. Sony TVs will be called something different, for example, but they’ll have Google TV built-in. And this is an important distinction because it allows Google to take what makes current TVs popular — showing TV content — and build on top of it. Apple doesn’t do that with Apple TV. Instead, they created an entirely new way to get content (by download via iTunes).

Users shouldn’t have to choose between TV or the web — they can have both, is the way Google put it.

Google’s Vic Gundotra went further. He called the question about positioning against the Apple TV “eerily similar to the questions we heard about Android.” Gundotra suggested that everyone look at the success they’ve had with Android. Success in an open way, he made sure to emphasize. “We’ll have similar success,” Gundotra said.

So yes, put another way, this is Android vs. iPhone round 2. Or maybe it will be round 3, depending on if Chrome OS netbooks beat Google TV to market. Chrome OS netbooks will compete with the iPad — which Steve Jobs has said is Apple’s solution that’s better than a notebook.

A follow-up question asked if this was really Google telling Jobs “where to stick his OS?” Gundotra tried to dance around the question, but noted the full keynote video will be on YouTube. “I’m sure if he sees it, we’ll hear from him,” he (maybe half) joked.

Gundotra then tried to dampen the cries of war a bit. “We continue to partner with Apple in many areas,” he noted. He said Google TV isn’t directed at Apple only. “Only” being the keyword.

Regardless of what happens, my position is the same: Google entering this space is great news for all consumers. It’s going to force Apple to move the Apple TV beyond a self-stated “hobby” and into a real product. As I (quite eloquently, I think) wrote back in March:

We, as consumers, need a living room arms race between Apple and Google (and Microsoft, TiVo, Roku, Boxee, and the rest) to kick the cable companies’ shitty television user experience to the curb.