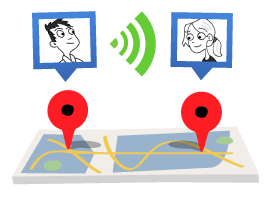 Google Latitude has 3 million active users, but you wouldn’t know it by the amount of buzz they get in the location space these days. (Which is to say, just about none.) The problem is that Latitude has been pretty restricted, and not exactly geared towards how most people are using location-based services these days. (Which is to say, checking-in.) But starting today, that is all changing in a big way, with the Latitude API.

This API will allow third-party developers to come up with their own apps that can take advantage of Google’s location services. This may spell some trouble for the location platforms out there that are just starting to hit their stride, such as Foursquare and SimpleGeo. And while you may think that Latitude’s fundamental problem still remains (that it is continuously updating, rather than based around check-ins), with this API, that will very likely be changing as well.

In its post on the matter, Google is a bit vague:

We’ve also learned that making your phone’s continuous location available in the background is tricky to do accurately and efficiently — just imagine your phone’s battery life if several apps were continuously getting your location in different ways? With this in mind, we built a free and open Latitude API that lets the third-party developers you choose start using your updated location in new ways without reinventing the wheel.

Looking over the documentation for this API, it’s clear that it should be relatively easy for developers to build a check-in service on top of Latitude. Much of the API is built around location lists. You can get a list of locations (as well as insert locations) in both users’ current location stream, as well as their historical stream (assuming they give your app permission to do so, of course).

Perhaps more significantly, Google is using the new Google Places API that assigns IDs to individual places — you know, the kind you check-in to. Could this help build the unified place database we’ve all been waiting for?

This all seems to be in line with what Google’s Steve Lee said earlier this month. At Web 2.0 Expo, he hinted that Latitude would start allowing for check-ins in the future. But he also said that the future was a combination of check-ins and always-on location (along with robust location history, which Latitude has). That future is coming very soon with this API.

If I were Facebook, I’d want to get my location entry out there pronto.

Update: SimpleGeo has posted a good response on their blog, noting that the Latitude API is more like Fire Eagle 2.0. Fire Eagle, while being an early entry in the location space, of course, never went anywhere. Here’s the key nugget in their take:

Fundamentally, this is what the new Google Latitude API is. It’s not a distributed geospatial platform that allows app developers to build robust location-aware apps. It’s not a location-aware game that you can check in to local businesses, find friends, and get coupons. It’s only concerned with presence.

Moreover, their take is that SimpleGeo will work nicely with Latitude:

While we see Apple’s Core Location service and Google Latitude API as a great way of acquiring a user’s location, the SimpleGeo API is what you do with that location.

That said, SimpleGeo is quick to note some of the privacy implications of this new API, which seems to mean that they might be at least in some ways worried about it (or how developers will perceive it).