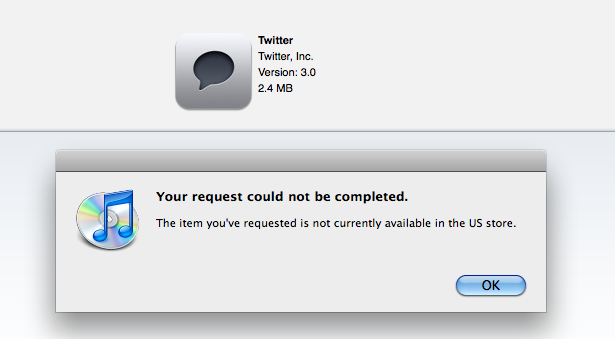 Just as we suspected late last night, Twitter removed Tweetie 2 for the App Store yesterday to make room for the newly rebranded “Twitter for iPhone.” It’s there right now in the App Store, labeled as simply “Twitter” — but you can’t download it just yet, as it’s likely still in the process of being put up.

Without being able to see the app just yet, the thing that immediately jumps out is that it’s labeled as “Version 3.0” — this suggests there will be some upgrades (beyond just the name) from Tweetie 2 (which, of course, was version 2.0). That said, Twitter for iPhone is actually smaller in file size than Tweetie 2 was (2.4 MB versus 2.8 MB), so I’m not sure what that means. That also doesn’t seem to bode well for the possibility that an iPad version of the app is included.

The reason Tweetie is becoming “Twitter for iPhone” is because Twitter bought the company behind it, Atebits, in April. Tweetie 2 is widely considered to be the best Twitter iPhone app, and Twitter wanted one app to point to for all those people searching the App Store looking for an official way to use Twitter on the iPhone. For Android and BlackBerry, they opted to make their own apps from scratch.

While Twitter for iPhone doesn’t show up in searches of the App Store yet, you can find it in the App Updates area of iTunes if you have Tweetie 2 on your system (though you still can’t download it yet). When it does go live, the (newly free) app can be found here.

Update: MacStories is saying that some international users have been able to download the app successfully. Feel free to send in pictures if you’re able to!