Like Twitter before it, and Facebook before that, Foursquare is gaining some momentum as a platform. There are now some 500 apps out there, co-founder Dennis Crowley tells us. Or at least, he thinks there are that many based on the number of registered tokens out there. Truth be told, even Foursquare only knows of about 100 or so of them first-hand. And that’s why they’re launching a new App Gallery today to help surface all of them.

The new gallery, found here, is a bit sparse at the moment. Foursquare is only highlight 10 apps to show a proof of concept for how the gallery will work. They’re asking all developers to submit their app through this page (or use this link) so they can showcase all the various apps built on top of Foursquare.

Along the top of this page, Foursquare will feature four apps in a nice, auto-rotating big box. Below that, they’ll have a box showing sets of six apps that you can page through. Or you can select different app categories such as “Mobile,” “Websites,” “Games,” and others. Along the right-hand side there is also a list of the most recently added apps. Users of Apple’s App Store will find the layout fairly familiar.

Apps themselves also have their own pages in the App Gallery. For example, here’s the page for Mob Zombies, an iPhone games that is built on top of Foursquare. Apps get descriptions and screenshots. The pagers also feature Facebook’s new Like button to easily share. And, of course, there’s a big button to “Try this application.”

Foursquare has some good timing. Their app gallery launches just as some developers are starting to get annoyed with rival Gowalla’s limited API. As for Foursquare’s API, the work continues. “We’re actively working with developers to define v2 of our API,” Crowley tells us.

Naturally, I also asked Crowley about the acquisition rumors. He notes that just in time for TechCrunch Disrupt (where he’ll be speaking), they’ll be “ready to annouce that we got acquired… by Nabisco!,” Crowley jokes. “We’re rebranding as TriscuitSquare. It’s gonna be SICK.” 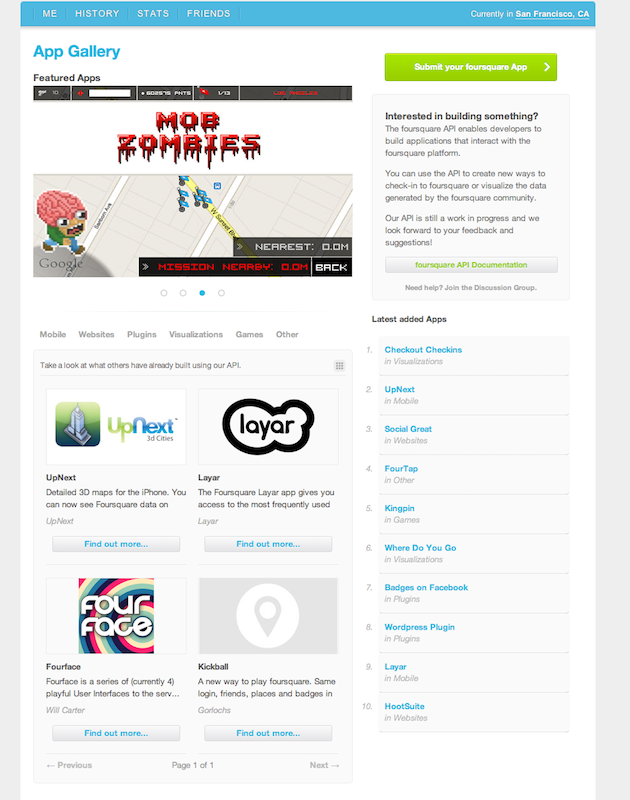 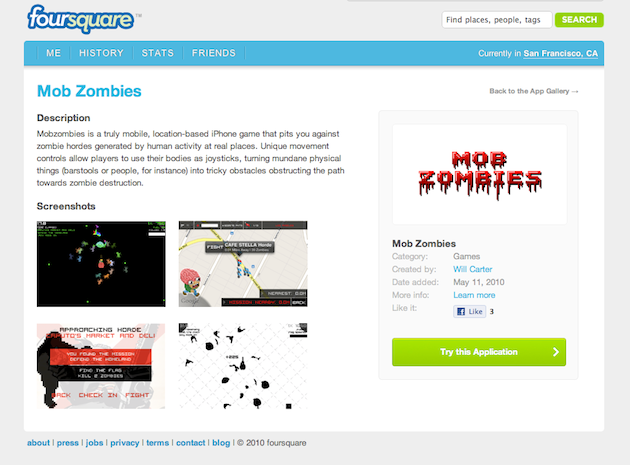