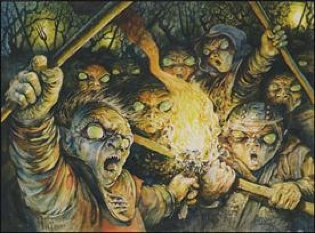 There’s a saying I love: “a camel is a horse designed by committee.” A variation is “a volvo is a porsche designed by committee.” Some of the best product advice I’ve ever heard goes something like “damn what the users want, charge towards your dream.” All of these statements are, of course, saying the same thing. When there are too many cooks in the kitchen all you get is a mess. And when too many people have product input, you’ve got lots of features but no soul.

Product should be a dictatorship. Not consensus driven. There are casualties. Hurt feelings. Angry users. But all of those things are necessary if you’re going to create something unique. The iPhone is clearly a vision of a single core team, or maybe even one man. It happened to be a good dream, and that device now dominates mobile culture. But it’s extremely unlikely Apple would have ever built it if they conducted lots of focus groups and customer outreach first. No keyboard? Please.

Digg is sort of on the opposite end of the spectrum The company has been standing still now for years as Facebook, Twitter and others have run laps around it. But the company is famous for listening to its hard core fanatical users. In 2007, for example, Kevin Rose surrendered to a mob of Digg users who were upset that Digg was blocking stories publishing the decryption key for HD DVDs. He wrote:

But now, after seeing hundreds of stories and reading thousands of comments, you’ve made it clear. You’d rather see Digg go down fighting than bow down to a bigger company. We hear you, and effective immediately we won’t delete stories or comments containing the code and will deal with whatever the consequences might be.

If we lose, then what the hell, at least we died trying.

Compare his statement to how Facebook routinely handles user revolts – by absolutely ignoring them. Once or twice a year Facebookers get upset that the font changed on the home page, and set up mass protests demanding that things go back to the way they were. Back in 2006 users were angry about the new News Feed and how it affected their privacy (how quaint). Hundreds of thousands of users joined organized protest groups to demand the product be killed.” CEO Mark Zuckerberg’s level headed response: “Calm down. Breathe. We hear you.” and “We didn’t take away any privacy options.”

User outrage over Holocaust denial? Not a budge. Beacon? Well, that’s the exception that proves the rule. Eventually Facebook did cave on Beacon, but later they just repackaged it and called it Open Graph. What do you think the final outcome of this week’s privacy explosion will be? Yep, you may go pound sand.

The point is Facebook knows what you want and is willing to street fight you in order to give it to you. They may go to jail, or to Hell, for all this (they won’t). But there’s a reason that half of the population of the Internet hits their site every month. This is the Age of Facebook. They know where this train is heading and they are clearing out every obstacle in their path to get there. Angry users are the obstacles. They aren’t cuddled and hugged. They either get out of the way or get run over by the train.

But anyway, back to Digg. They’re the opposite of Facebook because they really like getting the community’s input on things before they roll out. Or after they roll things out and then pull them back in when users get upset.

The HD DVD encryption key is just one example. Digg users also get to veto ads on the site, and are doing so with increasing frequency (oh, the power!). Digg’s most active users form a sort of shadow board of directors that guides the company. The end result is a very nice place to hang out for those 250,000 or so hard core Digg users. But for the rest of the Internet, not so much.

Digg has never had a mainstream crowd on their site, and they never will as long as they even listen to their users, let alone actually take action based on what they say.

Rose’s nature is to be an affable and loquacious guy. People love him, and Kevin loves to be loved. That’s great if you’re thinking of starting a religion or putting on self help seminars. But as soon as you start being a product dictator all those adoring fans start to think you’re a jerk who’s lost his way and never listens. The guy who goes to Las Vegas with Ashton Kutcher to put on a Diggnation show for thousands of people isn’t the guy who has a product vision and drives it home no matter what.

To his credit, Kevin is fighting back. He came back to the company that he essentially walked out on last year out of frustration. He’s gotten his investors to give him six months to show how he can turn Digg around. His core team, including Chas Edwards and Keval Desai, share his new vision, we’ve heard. Maybe something strong is coming soon.

But maybe not. One thing we’ve heard about the new Digg all along is that it is designed to keep the fanatics happy while bringing in the masses. That’s going to be a very difficult thing to do. Sort of like adding a bunch of airbags and cup holders to the Porsche and trying to sell it to soccer moms while maintaining your core customer base of balding, insecure middle aged men. Bringing peace to the middle east might be an easier task to take on than making a single product serve the needs of 250,000 hard core Digg….oh how do I put this…morons, as well as the billion or so relatively normal people on the Internet.

If they pull it off I’ll eat a TechCrunch Tshirt on stage at an event right after they’ve done it. But I don’t think they’ll pull it off. I think that they care too much about the hard core users and what those users want in their fantasyland Digg paradise. It’ll have lots of cup holders, that’s for sure. But it sure won’t be a porsche.

The clock is ticking. Kevin has been given six months, we’re heard, to get this ship going in the right direction. That means big user growth, particularly big U.S. user growth. Right now they’re at just under 10 million U.S. unique visitors (Comscore) per month. I imagine they think something like 50 million would be a nice goal for a year from now. For 50 million U.S. Digg users, I’ll eat that shirt and kiss Kevin Rose’s ring.

Just remember, Kevin, those fanatical users mean well, they really do. But they are nothing but distractions towards a true vision of Digg that will disrupt the way we share and consume news. That was the original promise way back in 2005. Now is your time to shine and show that you aren’t just a really nice, really fun guy. You are a hard core steel eyed product dictator who wants to kick some ass and change the world. And maybe then retire and go on TV a lot.

Fight the urge, Kevin. You want to win the war, not be the most popular startup founder who ever lived. You can be both, actually, but that comes from winning. I know you’re trying your hardest, but Sean Connery put it best when he said: