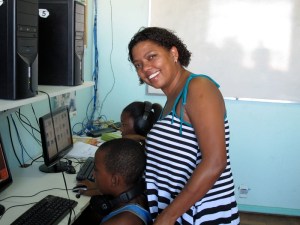 On the eve of my last trip to Brazil, I was watching an episode of CSI: Miami where David Caruso was tracking a violent drug kingpin in Rio. Every time they mentioned the favelas—the infamous slums that crowd Rio’s hills—his partner said breathlessly, “The most dangerous part of the city.”

Sadly—unlike nearly everything else on the over-the-top CSI franchise—the depiction of the favelas wasn’t an exaggeration. It’s essentially a war zone between drug kingpins and often-corrupt police officers, and many life-long Rio residents have never entered one. One in five people living in Rio’s slums have lost a family member to the drug war—and nearly as many blame the police as they do the drug dealers, according to Janice Perlman’s research in the excellent book “Democratic Brazil Revisited.”

It was a staggering lesson in the different types of poverty in the emerging world. While it’s hard to match the lack of infrastructure like water and sewage systems in an Indian slum, there’s little that can compare to the violence of a Rio favela. So it was understandable, as I entered a Rio favela a few weeks ago that my guides kept impressing on me that a year ago I couldn’t under any circumstances have come here. One year ago, a cab wouldn’t have taken me here. One year ago, no one would even deliver pizza here.

What’s changed in a year? Specifically, the city is doing something about the problem, embarking on a project of “pacification.” As it was explained to me, newly-trained, SWAT-style cops take each favela back, driving out the drug dealers, by any means necessary, in a recognition that the situation isn’t just a bad neighborhood, it’s an urban war-zone. Being new to the force, these police officers have a clean slate with the residents of the favela, and so are able to continue to protect it, keeping the peace. So far, eight favelas have been pacified. Residents I spoke with talked about the relief of being out from under the daily violence: Suddenly they can be a part of the city. But many are still wary. “This is the best I’ve seen the community in a long time, but I’m still scared,” said Nivea Mendes of the pacified favela Babilonia. “Very few people trust the government. They are just out for an election. I’m still skeptical.” Put another way, even though they’re physically gone, the drug dealers still have power in these neighborhoods—for now.

There’s another tactical problem with pacification that never would have occurred to me: 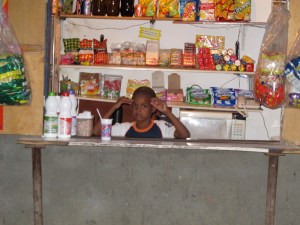 Violence aside, the move basically shoved the richest people – the criminals –  out of the favela, creating a need for a new livelihood for merchants and survival-level entrepreneurs (like the boy to your right and his family) in these neighborhoods. This is where technology is coming in.

For more than ten years a non-profit organization called CDI has been giving favela residents a different kind of freedom, setting up computer labs and offering training in everything from basic computer services to IT skills. CDI has built more than 800 community centers in thirteen countries giving more than 1.3 million people access to the Web, the bulk in Brazil and many for the first time. There’s an emphasis on sustainability—each community center charges for Web access and courses, but the rates are affordable for even the poorest Brazilians, as little as a couple of dollars per course. There’s also an emphasis on personal sustainability, with most people using the labs to learn marketable skills, write resumes and hunt for jobs. (Mendes runs the computer center in Babilonia; her picture is at the top of the post.)

The labs are run by someone in the community, and each class is required to take on a civic project using technology and the Web. One favela had a problem with rats, so some 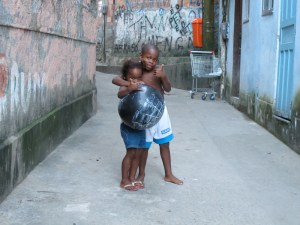 teens taking the class video-taped the infestation, edited the footage together and showed it to the city government, who would normally never venture into the slum to check things out. The trash was cleaned up, the rats went away, and babies stopped getting sick from the bites and scratches. We talk about the Internet changing the world a lot in Silicon Valley, but it has changed life for a lot of these people.

The exciting thing is the correlation with entrepreneurship and these labs. It’s not just the skills they learn, it’s a sense of empowerment that comes from technology. When I first started traveling for this book, I expected to find tons of entrepreneurs who’d grown up in slums, but in most countries that hasn’t been the case. Sure, there are plenty of examples of “entrepreneurship” in the purest subsistence-level form—traders, hustlers, drivers, tire shops and the like. But residents have told me the day-to-day struggle of life is so overwhelming, that the idea of starting a high-growth company is tantamount to colonizing the moon.

In Brazil, though, I’ve met several entrepreneurs who came from slums, two of which I wrote about in this post and another in this one. Like great entrepreneurs anywhere, these guys are the exceptions. But clearly, there is something about even the hardest life in Brazil that still allows people to dream big. And, increasingly, technology and companies like CDI play a big role in this. Each of these entrepreneurs trace back the early days of his company to tinkering and, essentially, hacking; one with computers, one with planes and advertising and one with bureaucracy. Computers, mobile and the Internet are the best canvases to hack and allow that hacking to have a bigger impact.

I’ve written about this kind of computer outreach into slums in India as well with NIIT’s Hole-in-the-Wall program and the proliferation of mobile phones and services , and I’ve also written about the serious investment Rwanda is making in bringing technology to its poorest citizens. But a lot of people are dubious about how much good this does people who, on the surface, have bigger problems. I recently finished reading a book called “In Spite of the Gods: The Rise of Modern India,” that rather sarcastically mocked the idea that emerging markets should invest in technology in poor areas when there are more immediate needs like food, water and employment.

The author, Edward Luce, has lived in India and admittedly spent far more time there 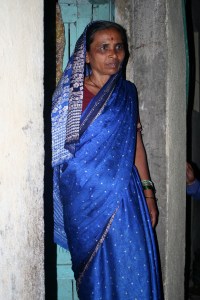 than I have. But we’ve clearly seen different countries. The last time I was in India I traveled to several villages and slums with SMSOne, a mobile news company I wrote about back in November 2009. In a half-urban slum outside of Pune, I met a woman who sold vegetables on a darkened street near a dirty river. (Pictured at her home to your left.) On the eve of SMSOne’s launch in that neighborhood, she was so depressed about her economic situation she poisoned herself. SMSOne’s mobile reporter heard about it and rushed her near-lifeless body to the hospital—not that either of them could afford any care.

His first 140-character story was about her situation and the community—usually mired in their own day-to-day struggle—rallied around her, paying her medical bills, convincing her that her life mattered. She said, through a translator with babies crying in the background of her one-room home, that things are better now.

The community has dozens of stories like this: The woman who had blood cancer and needed donors, the little girl born with a hole in her heart and her parents couldn’t afford 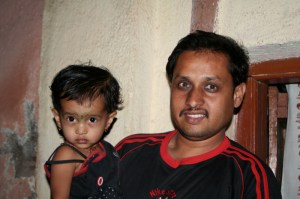 surgery (pictured to the right), and the community that all pitched in once the read these stories in 140-character SMS bursts. I went from the tire shop to the local temple to the winding streets of the neighborhood with the SMSOne reporter hearing these stories over-and-over again from the people who live there. The people who before SMSOne didn’t feel like a true community despite sharing the same crowded patch of India. It was striking how similar each story started to become, given how dramatic each was on its own.

Frankly, Luce’s attitude is why rich people shouldn’t be the ones making the decisions about what poor people need. It’s haughty to assume technology is the domain of only the privileged or that it is even used the same way by people living in dramatically different circumstances. The Internet gives people a voice and when you’re rich maybe you take that for granted. But in the slums of Brazil and India, I’ve literally seen it save lives.