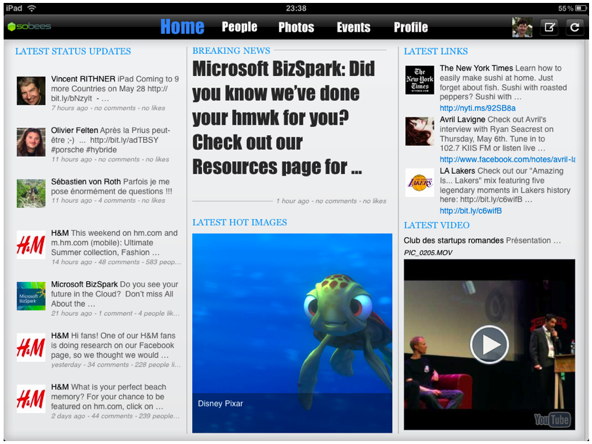 Twitter client Sobees, offers a number of social media clients on the market, including a native Windows client, a web-based client and a Twitter app for Android phones. Now Sobees is venturing into the iPad space with a native Facebook app. You can download the app here.

The app allows you to view friends’ status updates, wall posts, pictures, videos and links; view your friends’ recent photo albums; and manage events and birthdays on Facebook simply in a month calendar view. You can also update your status, comment and like a status from the app.

The app is free for the first month, according to Sobees founder Francois Bochatay. This isn’t the first Facebook client for Sobees; the Windows client includes support for Facebook, Twitter, MySpace, FriendFeed and LinkedIn.

Of course, Facebook doesn’t yet have a native iPad app but we are hoping the social network will release one, considering the immense popularity of its iPhone app. The current Facebook iPhone app in the app store is not universal and looks a bit junky when running scaled to twice its size on the iPad.