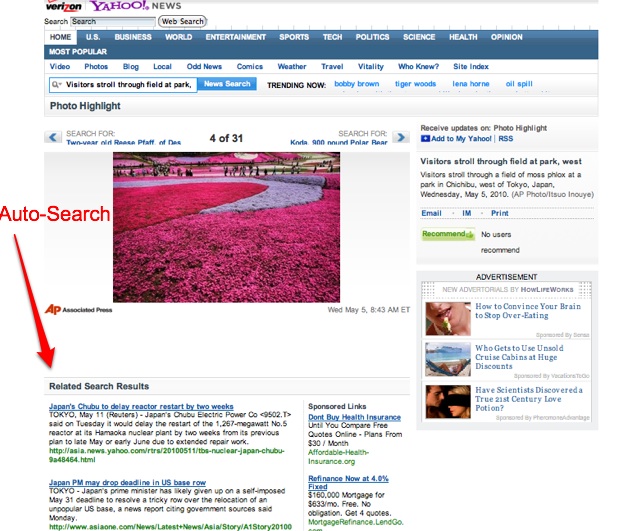 At Yahoo, a picture is worth a thousand searches. After a year of steadily losing market share, Yahoo showed nearly a one-point jump in U.S. search market share, according to comScore’s April search numbers. Yahoo went from 16.9 percent share in March to 17.7 percent in April. How did it all of a sudden regain its search mojo? One word: slideshows.

It turns out people aren’t conducting more searches on Yahoo at all. Yahoo is conducting more searches for them automatically on Yahoo News and Yahoo Finance. On Yahoo News, for instance, the searches are tied to photo slideshows like the one pictured above. Each photo generates related search results which are shown below the photo. On Yahoo News alone, searches went from an estimated 17 million searches to 190 million searches because of this new auto-search feature. Analyst Jordan Rohan of Thomas Weisel Partners calls it a “navigational ploy” and think sit is “unlikely to tie to revenue growth.”

Overall, search query volume growth continued to slow down across the board to 5.6 percent (versus 7.6 percent growth in March). Google saw its share decline from 65.1 percent in March to 64.4 percent, while Microsoft saw a 0.1 percent uptick to 11.8 percent. But there were other changes in measurement affecting these numbers. Backing all of those out, Google gained some share, while Yahoo and Microsoft lost a little bit.