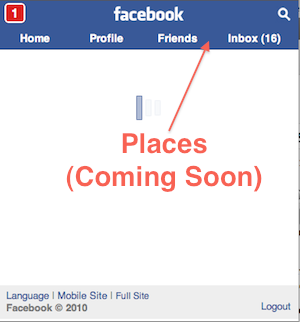 Over the past several weeks, there’s been a lot of speculation about Facebook’s location functionality. At least part of that speculation can end now. We now know what Facebook is planning to launch with regard to location shortly, because it’s right there in their code.

Specifically, it’s right there in the JavaScript on the touch.facebook.com version of the site. This is the mobile version of Facebook that is optimized for phones with touchscreens like the iPhone and Android phones. Visiting this site on the Safari web browser (which, of course, the iPhone uses a version of) causes something interesting to happen: it just hangs. And when you enable debug mode, it’s easy to see why.

This touch version of Facebook’s site is attempting to populate something called the “places_tab.” Unfortunately, Facebook hasn’t enabled that yet, so it throws the error. While that alone is interesting, much more interesting is what you find when you dig deeper into this JavaScript.

Based on the code, this is what it seems that Facebook is about to launch: A mobile version of the site using the HTML5 location component to grab your location information from your phone. Once it does that, you’re taken to this new Places area of Facebook that presumably will have a list of venues around you. From here you can click a button to check-in. Yes, there will be check-ins.

But it’s slightly more interesting than that as well. Facebook will record not only your latitude and longitude, but also your altitude, heading, and speed, according to this code (and assuming they can get all of that information). It will also record the accuracy of the location measurement. I’m just speculating here, but perhaps that will help curb cheating that has begun to run rampant on other location services like Foursquare.

Again, this code is only found on the touch.facebook.com version of the site right now (and this code is specifically in a directory for the iPhone). That may suggest that Facebook will launch the functionality here first, and then move it to the native mobile applications on platforms such as the iPhone and Android. This also means that it may not be on Facebook proper to begin with. This makes some sense since only some desktop browsers support location right now. Still, you have to assume that the Places area will reside on Facebook.com somewhere, even if you can’t check-in from the desktop at launch.

This information seems to go along well with reports last week in AdAge that Facebook was teaming up with some big brands for their location functionality. Presumably, these brands will be populated, and maybe even some highlighted, in this new Places tab.

After reading those stories, I wondered if Facebook was planning to do check-ins, or perhaps do something more along the lines of Twitter: simply let people tag their location to status updates. It’s now clear (assuming that they fully deploy this code) that check-ins are in fact coming.

That said, I still wouldn’t be surprised if Facebook allows other location services such as Foursquare and Gowalla to populate location parameters through Facebook Connect or the newer OpenGraph APIs. Then the question is if Facebook would also use those services’ places databases to build out its own — or if they have already been doing that behind the scenes. As I wrote yesterday, Facebook is likely to be a key component in moving towards a place database that everyone seems to want, but no one can seem to deliver on.

And just to add a little more intrigue to all of this, we hear that Facebook CEO Mark Zuckerberg was in New York City yesterday meeting with Foursquare co-founder Dennis Crowley. A second source confirms that the two sides have been talking again recently (not that it’s unusual for two companies to talk, but the timing is interesting). So was this meetup yesterday one last friendly meeting before they start going head-to-head? A meeting to solidify a partnership? Something more? We should find out shortly… 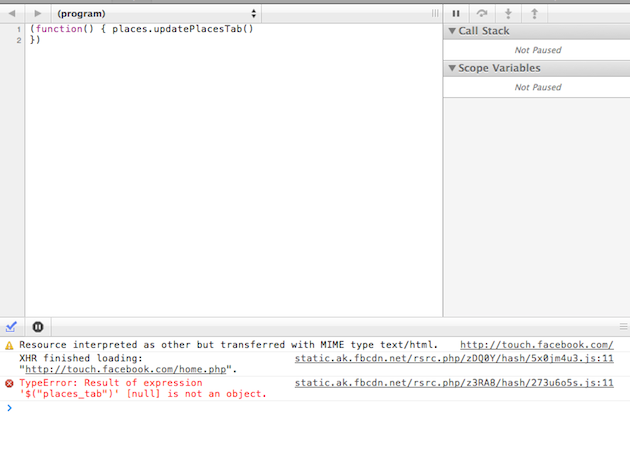