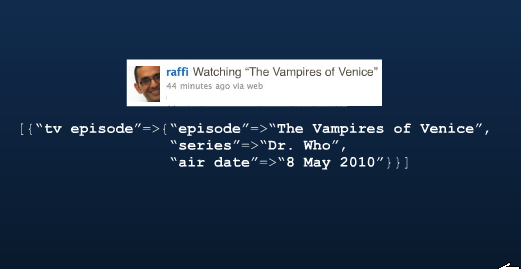 During a presentation in London today, Twitter engineer Raffi Krikorian offered up an early glimpse of what Twitter’s highly anticipated new annotations feature (or, as he refers to them at one point “Twannotations”) will look like. “Threw together a quick, and extremely preliminary view on what @twitterapi has been working on — and what I feel has the ability of being a game-changer on the platform — Annotations,” he writes on his Posterous blog. Krikorian also posted his deck, which I’ll embed below.

Of note, Krikorian says that every tweet annotation will have a “type,” and each type can have several attributes. This information will apparently have same “visibility policy” as tweets themselves, which seems to mean “public” unless you set your account to private.

More significantly, Krikorian notes that you’ll be able to put anything you want in annotations. Twitter will have some suggestions to help developers get started, but they won’t be restricting anything, apparently. Twitter will also apparently be publishing annotation stats to the public. There will be some sort of “Explorer” product that will give stats about most used, most adopted, and trending annotations.

Check out the full deck for a few other tidbits of information, including about the APIs.