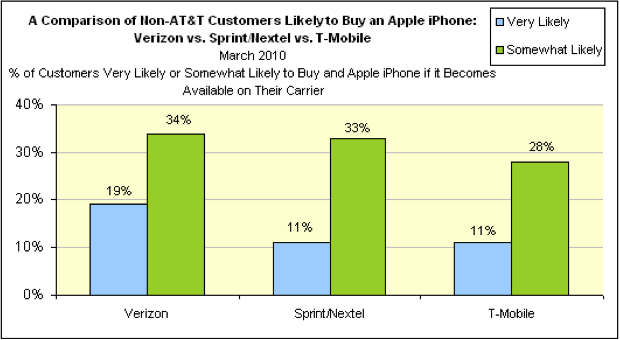 It’s been said before, but let it be said again: Verizon better be kicking themselves right now. Not only did they not fight for the iPhone, they outright turned it away.

This new 4,000-person survey by ChangeWave probably isn’t going to make them feel much better.

The survey asked over 4,000 customers of Sprint, Verizon, and T-Mobile whether or not they’d buy an iPhone if it were offered on their carrier. Verizon’s customer base is by far the most excited about the idea, with 19% saying they would be “very likely” to buy it, and 34% saying they were “somewhat likely”. Sprint’s customers were a bit less enthralled by the idea, with only 11% and 33% saying they were very like/somewhat likely to make the purchase. With 11% and 28% in each category respectively, T-Mobile’s patrons were the least excited over all – but that’s still just shy of 40%, which is a pretty massive chunk.

Alas, “Very Likely” and “Somewhat Likely” are the only options that ChangeWave shared the results for, leaving the “Oh hell nah” and “Whats an iPhone?” choices unrepresented.