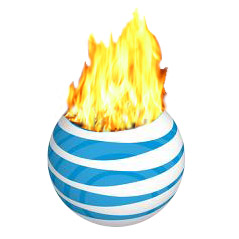 Zach Epstein from Know Your Cell has managed to burn through 30 gigabytes of data on his iPad in two days, just to test AT&T’s claims that the iPad plans are truly unlimited.

Ok, I made the fire bit up… basically, the upshot is that, yes, when AT&T say “unlimited”, they actually mean it this time.

Zach was originally aiming to pull through 100GB of data over the course of the month, but he’s now decided that 30GB is enough to prove the point. And it probably is, seeing that the last “unlimited” plans were actually 5GB plans in disguise.

For all the grisly details, along with a (warranted) “don’t try this at home, kids” disclaimer, head on over to Know Your Cell.