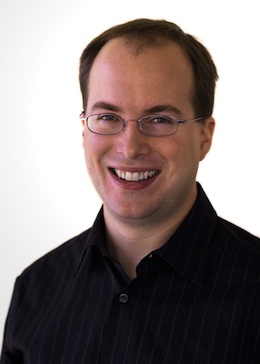 Today at the Web 2.0 Expo in San Francisco, Paul Buchheit took the stage to talk about his current role at Facebook, as well as his previous roles at FriendFeed and Google (where he coined the phrase “Don’t be evil”).

Buchheit is always a good interview because he isn’t afraid to speak his mind. Today, among his quotable bits included that Facebook is an amazing product because it “has all the users.” “The real power is in the people,” Buchheit stated rather obviously.

More interesting were Buchheit’s thoughts on what’s coming next for the web. Making it easier to have lightweight conversations is the future of communications on the web, Buchheit said. This means something coming from the man who created Gmail.

He noted that he thinks the company he co-founded (and sold to Facebook), FriendFeed, got this right. Now some of those elements are spreading throughout the web, such as Facebook’s newly ubiquitous “Like” button.

Buchheit noted that if you were to go back in time 20 years and tell someone that everyone will have a mobile phone in their pocket, but that they’ll use it to send short text messages rather than make voice calls, people would have thought you were crazy. And if you told them those messages would cost about $0.20 each, they would have thought you were insane. And yet, that happened. That’s thanks to the simplicity and ease of sending these messages, he said.

Sarah Milstein: The big theme is around the power platforms. How is Facebook most interesting as a platform.

Paul Buchheit: The real power is in the people. It’s an amazing product because it has all the users (laughs). It’s also about connecting with friends on other sites when you extend it.

SM: Have you talked to other developers about their ideas of it?

PB: Yeah we’ve talked to a bunch of start ups. And we used it at FriendFeed. It was a mixed experience back then. But with the new Open Graph API, it was “repaired.” A lot of that came out of our FriendFeed experience.

SM: Can you explain Open Graph?

PB: A very simple RESTy API that lets you get at all the data in Facebook (that you have permission to get). It’s all about being simple. It’s the same data basically as the old API, it’s just easier to get to.

PB: I changed my privacy settings to be more public. I like the idea to share things easily — except my phone number and email. This again goes back to FriendFeed. It’s about serendipity. but it’s hard to predict what those things will be. Things tend towards being better the more we share.

SM: Are Zuckerberg’s the default settings?

PB: Not sure. But if you go to his page, it looks like it’s mostly public.

SM: So after Gmail and FriendFeed – what’s coming next on the web do you think?

PB: FriendFeed was all about making it easy to share things – and have conversations around them. The “liking” that pops up everywhere these days. I won’t say we invented it, but I can’t remember seeing it anywhere else before we did it. Comments were very easy — there were no line breaks. It was very quick and lightweight. That’s the future of a lot of what’s upcoming in the communication mediums. Making it easier to do lightweight conversations.

Imagine going back 20 years and telling people they won’t make voice calls, but instead they’ll be sending tiny messages (SMS). It would sound insane. And these things cost $0.20 each! That’s an interesting question — why is this popular? It’s because it’s so lightweight, and it doesn’t have to interrupt you. We’re going to see more of that. It’s the pattern of Facebook and Twitter.

It’s not too shallow. It creates the context for conversations later on.

SM: Let’s talk about your investing. What’s most interesting these days?

PB: I don’t have any formula. The thing I want to know is “why?” Why do they care? You shouldn’t start a company because you want to be rich. The best companies are aiming for impact. Inside Google and Facebook it’s the same. There is a vision from the founders down. You may not see that from the outside, but it’s there.

Google is about information, and making things fast. Facebook is about sharing and the connection.

PB: I think everyone is moving towards lightweight, rapid iteration. It’s the lean startups. That’s a great trend. That’s what we tried to do at FriendFeed — launching features on the same day you come up with them. I could never survive in the old software world.

SM: Final question: Who do you admire on the web?

PB: I follow a lot of random links. This morning I was reading some random guy’s blog — I don’t even know where it came from. I just found it off of someone’s FriendFeed. That’s what’s so exciting about the web — almost anyone can become important. A message can reach the whole world.