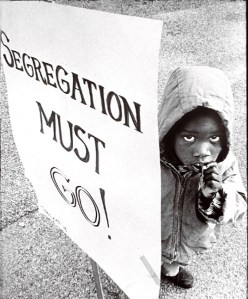 Waking up in my San Francisco hotel room yesterday, I immediately knew something was wrong. It was a mess.

In fact, the whole hotel was a mess. Carpets un-vacuumed, brassware unpolished, rooms unserviced, newspapers undelivered. It was a story writ large across the whole city – leaves piled up knee-deep on the sidewalk, restaurant tables uncleared and water glasses un-refilled. It was as if every essential – but mundane – service had ground to a halt, instantly and without warning.

Only when I reached the Civic Center did I realise what was going on: all the Mexicans were gathered there, protesting Arizona’s new senate bill, SB1070.

“Stop!” I cried, “stop this nonsense! Put down your bi-lingual protest signs and your American flags and get back to work!” My hotel room was not going to clean itself, and I was hungry for enchiladas. But the Mexicans ignored me – perhaps because I don’t speak a word of Spanish or perhaps because they couldn’t hear me over the chanting; but probably because I’m white. Racists.

Indeed, this week, the subject of racism is on everyone’s lips. First Arizona turned the concept of innocent until proven guilty on its head, passing a law that forces people who look Mexican to carry documentation that proves they’re not in the US illegally or face six months in prison. (British readers may be forgiven for feeling a sense of deja vu.) Meanwhile, across the Atlantic, we Brits were having our own race-related scandal, when Prime Minister Gordon Brown was caught on a live microphone calling 66-year old voter, Gillian Duffy, “bigoted” after she harangued him over the number of Polish immigrants “flocking” to the UK.

To his eternal shame, Mr Brown apologised profusely for his comments the next day, claiming he had misunderstood Mrs Duffy’s words despite the fact that, like many older white voters, her blaming polish immigrants for many of the UK’s problems plainly is a form of bigotry (Poles are Britain’s equivalent of Mexicans in the US, except Poles are allowed to immigrate to the UK freely and without a visa).

I’d like to say that I’m shocked at Arizona’s new law, or at an old white lady living in the north of England being fearful of foreigners – but of course I’m not. Arizona is a state with an increasingly large population of white people above retirement age and study after study has shown this group to be the most likely to hold anti-immigrant, or even out-and-out racist views. But equally, I’m heartened – and I mean this in no way callously – that these people are literally a dying demographic. Growing up in their place is a generation which, thanks to the Internet, is exposed daily to people of different races, colours and creeds.

Thanks to the proliferation of social networks, which recognise no national or social boundaries, it’s now just as easy to make friends with someone in Africa as it is to connect with someone in Arkansas. At Munich’s DLD conference two years ago, Randi Zuckerberg spoke inspiringly about how Facebook was bringing together young people from both sides of the Israeli/Palestinian conflict through their shared membership of Facebook groups. Just last week, Slate cited a paper from the University of Chicago which showed that people who get their news from online sources are more likely to have a balanced news diet (ideologically speaking) than those who get their news offline. As an avid Internet user, so the study claims, I’m likely to visit both the new York Times and Fox News in order to get a balanced picture of events than someone who relies on a single newspaper.

The trend, according to champions of Internet diversity, is clear: the Internet makes us less fearful of people with different ideologies, backgrounds or skin colours to our own. And this, of course, is A Good Thing. In just a generation, laws like that passed in Arizona or opinions like that expressed to Prime Minister Brown in Rochdale will be a thing of the past and, thanks to social media, we’ll all live together in perfect harmony. Ebony and Ivory, etc etc etc. In fact, as far as I can tell, there’s just one problem with that vision of Christmas yet to come…

Let’s start with the Chicago study. Certainly the results paint a positive picture of online diversity: the numbers clearly indicate that online news ‘consumers’ visit a ideologically-balanced range of sources every day, especially compared to their offline counterparts. But what the study doesn’t, and can’t, show is why they visit those sources.

A quick look at my browser history shows that in the past 24 hours I’ve visited BBC News Online, the New York Times and the Guardian. Liberal news organisations all. But in that same time period, I’ve also checked in to the Murdoch-owned Sun newspaper, the Drudge Report and even Fox News (several times). According to the study, then, I’m an open minded person with a balanced news diet. But of course I’m nothing of the sort. In reality, my reasons for visiting FoxNews.com are the same as those of most of my cheese-eating, US-hating, Osama-hugging, socialist liberal friends – I’m checking in on the enemy, hoping to find something outrageous to back up my pre-existing biases against the American right. And before any Proud Hannity-waving Patriots reading this get too outraged by that confession, admit it: you visit the Guardian and the New York Times for precisely the same, if polar opposite, reasons.

The truth is, if we’re not careful, the Internet is going to make us more, not less, distant from people who don’t share our views or heritage. In the real world – in the workplace, in bars or just walking down the street – it’s almost impossible to avoid interacting with people who are different from ourselves. Of course some people still try to avoid that inevitability – think apartheid in South Africa, or the more recent story of a British holidaymaker who demanded that a hotel in Florida keep all “people of color” (or those with “foreign accents”) away from him and his family. But thankfully in 2010, the majority of people consider such examples to be (in the former case) grounds for regime change or (as with the latter), bizarre front page news.

And yet in the online world such filtering and sorting happens every day without being in the least bit remarkable. Just consider the news that – according to a study by Edison Research (reported by Business Insider) – “black people represent 25% of Twitter users, roughly twice their share of the population in general”. As a white person this number surprised me somewhat – and if you’re white, I’ll bet it surprised you too. Twitter feels like one of the whitest sites in the world to me: full as it is with self-important middle-class hipster kids retweeting New York Times stories and the fact that they’re having sushi for lunch.

On Facebook or other social networks that better reflect my real-world relationships, I see a far more representative number of non-white faces in my friend lists and on the pages of friends-of-friends, while Twitter – by contrast – is hideously white. In fact, the only time I see a high concentration of faces that are different to my own is when I venture into the curious world of trending topics, and specifically hashtag memes. There I can guarantee that at least one of the daily trending memes will have been started by (vast majority) African American teenagers, exchanging #jokes on subjects like #funeralrules and #iWantMyMoneyBack (both grabbed from Twitter’s front page just now). Like the confused 30-year-old white person I am, I spend a couple of minutes browsing the jokes, get confused and scamper back to the safety of my own feed and its talk of trendy Japanese food and how terribly racist Arizona is.

Without really meaning to, I’ve created my own little Twitter bubble of People Like Me: racially, politically, linguistically and socially. And every day across the Internet a new tool or service is launched that makes it easier for people to do exactly the same: to filter the vast amounts of information available online, according to their personal beliefs or interests. Hashtags, follower lists, RSS feeds, personalised news sites – all the better to surround ourselves with people and views like ourselves and our own.

There are two basic types of dystopian future: the 1984 future and the Brave New World future. In the 1984 future, the government forces us to think and act in a certain way, driving undesirables into ghettos and threatening with physical harm those who think or act differently. In the Brave New World future (or possibly the Neil Postman future), the government doesn’t have to do anything to force our behaviour. Instead we’re given the tools to do whatever we want, creating an illusion of total freedom which no-one fights or questions until its too late and we realise we’ve lost the capacity for critical thought.

If apartheid or the new laws in Arizona represent the 1984 future, then there’s a real possibility that the Internet – and social media specifically – will eventually lead us into an even more terrifying Brave New World future. A future where the tools that once promised to help us meet people with different backgrounds and ideologies from our own actually end up being used, quite unintentionally, to segregate us from those same people.

And given the increasing influence that online behaviour has on how we act  in the real world, perhaps a generation from now – rather than laughing at Arizona’s long-overturned SB1070 and the years-dead concept of racial or ideological segregation – we’ll find ourselves sitting in our electronically filtered and hashtag-segregated ghettos, looking back at the good old days. The days, way back in 2010, when it was only the very old or the very stupid who thought that finding ways to filter and separate ourselves from those who are different was a good idea.