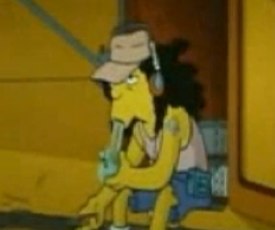 Yahoo CEO Carol Bartz bristles at outsiders opining on what Yahoo should be doing and not doing. An example – just a couple of days ago, when asked about our post saying that Yahoo shouldn’t buy Foursquare, she told TechCrunch EU editor Mike Butcher “I think it’s very easy for people to talk about what somebody else should do, but when confronted about it themselves they look at it a little differently.”

Along with lots of swearing, that’s been her key message since day one. Her first day on the job, in January 2009, she said “It’s been too crazy. People outside Yahoo deciding what Yahoo should do, shouldn’t do. That’s got to stop.”

But that didn’t stop her from giving out a little advice of her own yesterday. Her target? That one-trick pony Google. Says Bartz to the BBC:

Google is going to have a problem because Google is only known for search…It is only half our business; it’s 99.9% of their business. They’ve got to find other things to do…Google has to grow a company the size of Yahoo every year to be interesting.

An interesting argument. But even if all of Google’s non search endeavors are ignored, like Apps, Android, Chrome, YouTube, etc., they still beat her test.

In the last year, Google’s share price has gone from about $393/share to $532/share. That’s about $44 billion in market cap gain. Yahoo’s market cap, including those fat Asian assets, stands at a little under $24 billion today.

“They certainly are taking people’s attention and time,” she said. “But what is kind of wrong about the conversation is that social just means Facebook. “Social is interaction. Social is commenting on news stories. It’s blogging. It’s sharing photos. “So there are social capabilities running throughout all of our sites, including Twitter feeds and Facebook feeds.”

I actually wonder if Bartz has ever visited Facebook. She certainly doesn’t understand what the core of Facebook is all about. And I don’t see a whole lot of social going on at Yahoo, and the stuff I do see is being brought in from as Bartz says, Facebook and Twitter.

The yelling and the rhetoric are entertaining, certainly. And trashing competitors that are crushing you is probably cathartic. But Rome is burning, and words won’t put out that fire. So pass the bong, Carol, because I want some of whatever it is that you’re smoking. We can watch Rome burn together and laugh and laugh about how uninteresting Google and Facebook are.