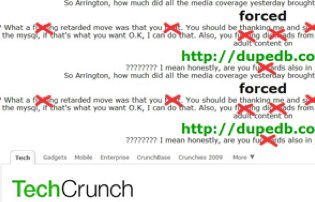 Remember that hacking incident we had back in January? TechCrunch.com was defaced twice over a two day period and was redirecting for part of that time to a third party site.

We got through the event and mostly put it behind us. But recently Garda (Ireland’s national police force) and the U.S. Secret Service have been in touch with us because they think they found our man. He’s a suspect in another case and evidence strongly suggesting he was the TechCrunch hacker as well came to their attention. He redirects hacked sites to a website he owns and generates affiliate revenue.

These law enforcement agencies now want to know if we want to press charges so that they can bring a criminal action against the suspect in the United States.

They sent us some of the evidence, including IRC logs where the suspect was boasting about the TechCrunch hacks even as they were occurring. Some of this is pretty entertaining, particularly that last chat (some identifying information was removed). When you’re done reading this, we’re going to let you decide – do we press charges or just let this go? The poll is at the bottom of the post. Whatever you decide, we’ll do.

Suspect: There’s no such time as a ‘good time’ to be hacked of course, but one can only imagine that today is a better day for TechCrunch to be hacked than tomorrow. That’s when the site will be expecting a large amount of traffic as millions of people around the world look for information about the new iSlate/iPad/iTablet/iDontKnowWhatItWillBeCalled due to be announced by Apple.more
Suspect: gonna fuck em in pooper tomorrow
Suspect: ehhhh
Suspect: this is too fucking funny

Suspect: http://www.washingtonpost.com/wp-dyn/content/article/2010/01/26/AR2010012600587.html
Suspect: rofl
Suspect: after tomorrow there will be 100x more hype =D
Suspect: HOLY SHIT
Suspect: even bbc wrote article about it
Suspect: http://news.bbc.co.uk/2/hi/technology/8480467.stm
Frien3: ur fuxed
Suspect: i dont get it
Suspect: i mean TC has no value really..
Friend 4: you hacked em?
Suspect: funny that everyone is hiding the url
Suspect: yes
Suspect: earlier
Friend 5: haha
Friend 5: when
Friend 5: today?
Friend 5: lmfao
Friend 5: yea
Friend 4: good luck.
Suspect: tomorrows the new apple tablets announced
Friend 4: hope you cleaned logs?
Suspect: im ready to fuck that shit up bad
Suspect: :D
Friend 4: you still got access? haha
Suspect: yeah
Friend 4: lmaoo
Friend 4: root?
Suspect: only mysql
Friend 4: well
Friend 4: wait till tomorrow.
Friend 4: then just fuck shit up, crazy ass style.
Friend 4: “There’s no such time as a ‘good time’ to be hacked of course, but one can only imagine that today is a better day for TechCrunch to be hacked than tomorrow when the site will, presumably, be expecting a large amount of traffic.”
Friend 4: :p
Friend 5: bad hackers
Friend 4: and just hope that you dont get caught -.-
Friend 4: http://news.bbc.co.uk/1/hi/technology/8478764.stm
Friend 4: o cool
Suspect: im gonna rm all the sites and mysql
Friend 4: :p :p
Friend 4: :p how did you get in?