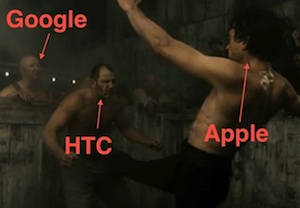 As you may have heard, Apple filed a massive lawsuit against phone-maker HTC nearly two months ago. Apple is alleging that HTC is infringing on over 20 of its iPhone patents. While HTC makes phones for a number of partners, it’s pretty clear that this is Apple going after Google’s Android platform indirectly. And now Google may have just found an unlikely ally in this fight: Microsoft. [Update below with a new interesting twist.]

Yes, the software giant, which makes the rival Windows Mobile (and soon Windows Phone 7) phone software has announced a deal with HTC that allows them to license their patented technology. On the face of it, this deal may make some sense since HTC also makes Windows Mobile phones. But the key to this is right there in Microsoft’s statement on the matter, “Microsoft Corp. and HTC Corp. have signed a patent agreement that provides broad coverage under Microsoft’s patent portfolio for HTC’s mobile phones running the Android mobile platform” (Emphasis mine)

So yes, this seems to be Microsoft lending its (undoubtedly massive) arsenal of patents to help HTC and Google combat Apple (though, naturally, the rationale behind the deal — and Apple — are never named). It’s hard to imagine what else this could possibly be about [more below]. It’s also hard to figure out why Microsoft sent this release out at 11:30 at night.

While Microsoft undoubtedly gets some pleasure out of helping someone else fight its longtime rival, Apple, these days, the company seems much more at odds with Google. And yet, they’re helping them out here (yes, again, indirectly). Of course, this undoubtedly makes sense economically for Microsoft — they’ll receive royalties from HTC, presumably for each device sold. Yes, Android devices. The release also notes that the “agreement expands HTC’s long-standing business relationship with Microsoft.”

This past month, HTC was thought to be the leading candidate to buy Palm — if for no other reason than their mobile patents that may help in the Apple suit. But last week, HTC reportedly dropped its bid for Palm. Perhaps the negotiation of this deal made that much easier to do.

Update: And this just got much more complicated. Microsoft is now apparently claiming that Android is infringing on its patents, CNET reports. So this deal may have more to do with HTC covering itself if Microsoft decides to go after Google. But it’s hard to know for sure at this point.

Microsoft has taken the position, according to those close to the company, that Android infringes on the company’s patented technology and that the infringement applies broadly in areas ranging from the user interface to the underlying operating system.

So Microsoft, with this deal, may be both threatening and inadvertently helping Google (if their patents help HTC against the Apple suit). Very interesting, to say the least.