In February we reported that legendary angel investor Ron Conway was raising a small seed fund for SV Angel from outside investors – which is notable because for the last decade or so he has only invested his own money in startups.

Today Conway came by our studio for an unscheduled talk and right off the bat announced that the new fund is now closed, and that over demand led the SV Angel team to double the size of the fund to $20 million. Around fifteen investments have now been closed in the new fund.

Conway also spoke about the big trends in tech right now. There are three “megatrends” as he puts it – real time data, the social web and flash marketing. These are all “billion dollar industries” he says. 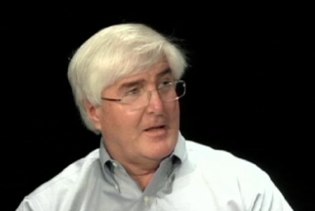 The explosive growth of Facebook and Twitter illustrates that social media is here to stay, he says. And he thinks a lot of new startups will grow and be successful within this ecosystem.

Flash marketing, or social commerce, startups like Gilt Groupe and Groupon have “come out of nowhere” and are revolutionizing ecommerce. In three years, he says, you won’t think about Walmart, Target and Amazon when you think about ecommerce. You’ll think about this whole new wave of companies doing flash marketing.

Conway says SV Angel invests in 2-3 startups per month, but 5 qualified deals a day are referred to them through their network. And Conway’s old fashioned human network seems to do just fine in a Facebook world – he says he knows 5,000 or so people who refer deals to him, and that’s pretty much the only way to get to him and his team. SV Angel doesn’t have a website, and if you want to get in front of them you need to be referred by someone they already have a relationship with.

Sounds hard? It is. But his track record speaks for itself. Proper due diligence is the only way to invest successfully, Conway has told us before. Using a trusted friend network to pre-screen deals allows them to spend their time on companies they are likely to want to invest in. And even then, only 1 in 30 make the cut. Every deal he’s done in the last year at least, he says, was referred in.

Still, if you really want to contact him, Ron gives his email address at the end of the video. I apologize to you for dubbing that out at his request.