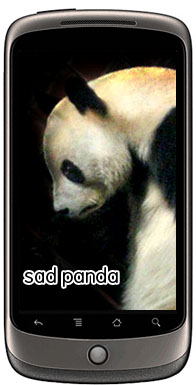 What’s that you say? Your Nexus One can’t hold a 3G signal worth a damn?

Bummer, dude! In a response to the angry masses demanding a OTA fix to rid them of their woes, Google employee Ry Guy has disclosed that they’re no longer “investigating further engineering improvements”.

I’ve seen some recent speculation on this thread about an OTA to improve 3G connectivity and I want to give you an update on the situation.

While we are continuing to monitor user feedback regarding the 3G performance on the Nexus One, we are no longer investigating further engineering improvements at this time.

If you are still experiencing 3G issues, we recommend that you try changing your location or even the orientation of your phone, as this may help in areas with weaker coverage.

Can’t get 3G where you’re standing? Well, then “[change] your location.” Duh.

It’s entirely possible — likely, even — that there’s simply no way to improve reception via a software update. They can only improve basebands and radio firmware so much; at a certain point, it’s like trying to improve your car’s mileage by changing the shape of the gas pedal.