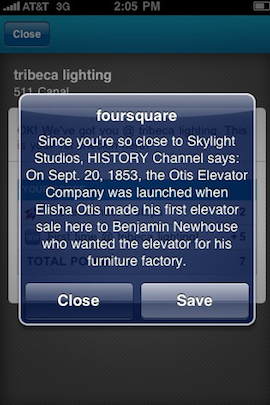 For all the talk about Foursquare, one of the coolest features that gets very little buzz is the Tips area. Here, you’ll find suggestions about venues from other users of the service. And if you’re friends with a user who has left a tip, you’ll get a notification with the tip on your iPhone when you check-in somewhere close by. The History Channel has decided to make use of this feature in an interesting way.

The cable television channel has started populating tips at various venues around the United States to coincide with its new show, America The Story Of Us (starting April 25). When you check-in at one of these venues with a History Channel tip, you’ll get a notification with the tip (see screenshot). But rather than this being a standard tip, it’s a bit of history about the venue you’re currently at. Pretty cool — it makes Foursquare into a kind of real world Pop-Up Video.

Foursquare has no shortage of mainstream media partners, and History Channel is one of the newest. You can see a full list of their tips on their Foursquare page. Here, they also note that by using Foursquare, you’ll unlock special History Channel badges, and will be entered into a sweepstakes that will randomly give out prizes each week between April 25 and June 6.

As has been widely reported, Foursquare is currently in the process of deciding whether to raise a new mega round of funding or sell to Yahoo. 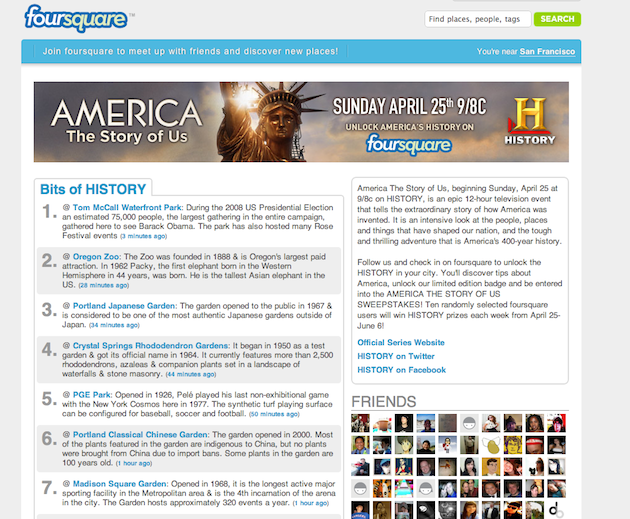