Crystal Yan, a senior at Monta Vista High School in Cupertino, was actively involved in student business organizations and case study competitions, but she never considered a computer science course, much less a career in programming– until she enrolled in the Technovation Challenge— a program that introduces girls to tech entrepreneurship. “I saw this as an intersection of a world that I knew [business] and technology, it was a chance to learn about the other side.”

The Technovation Challenge is the Bay area chapter of Iridescent (a non-profit education group that links mentors to students) in partnership with Girls in Tech. Over the course of an eight week program, 45 high school girls and 25 mentors worked in teams to create an Android app from scratch and build out a marketing plan. The program culiminates in “Pitch Night,” an event held this evening at the Microsoft campus in Mountain View. The teams presented their apps and business plans to a panel of business leaders, consisting of Katherine Barr of Mohr Davidow Ventures, Mendel Rosenblum co-founder of VMWare and Adeo Ressi of The Funded. It’s a small program with grand ambitions: to close the huge divide between women and men in Silicon Valley.

“We wanted to expose them to high tech, connect them to mentors, and help them understand what opportunities are out there,” says Technovation Challenge’s founder, Anuranjita Tewary. “It’s about confidence.”

For all the progress in Silicon Valley, the proportion of male to female founders remains grossly skewed. According to Dunn and Bradstreet data, of the tech firms founded in 2004 only 3% were founded by women. Unfortunately, not much has changed in the last six years. When you think of the top tech leaders, you think of Steve (Jobs, Ballmer), Eric, Ev— the Carol Bartzs, Diane Greenes are the obvious exception, no where near the rule.

Talking to students, like Yan, it was interesting to hear how some of the students considered themselves experienced in one field, either technology or business, but were eager to learn about the other side of the equation. Devi Kovi, a sophomore from Monta Vista H.S. who helped create a flash card app called Dotopia, says she has been programming since 7th grade but never fully considered how to leverage those skills into a more entrepreneurial career.  “I only had the computer science aspect of it,” she says. “This will help me ultimately start a new company.”

The pitches overall were far from perfect, some groups had half-baked business models, while others had a hard time defining their target market and competitors.  But the sum of their accomplishments was very impressive. As Barr of MDV says, “It was incredible to see them pull all of this together and pull together a business plan in just a short time….It was unbelievably inspiring.” 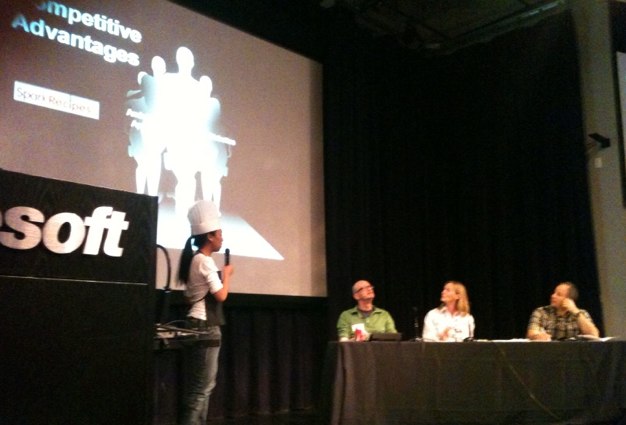 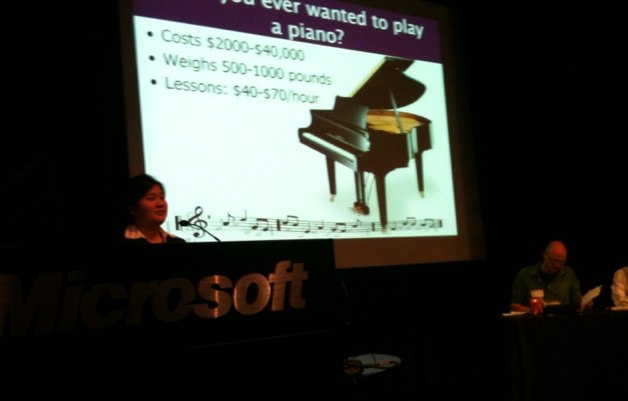 The winner of the competition was team Zeal, with an app called Mash, inspired by the classic childhood fortune-telling game, you input potential outcomes and the results can be posted on social media sites like Facebook and Twitter. The team won $1,000 per student in college savings bonds, $25,000 to develop the app from MobMark and $5,000 in advertising from AdMob. The second-place winner, which I thought was very promising and well articulated, was team Creanova with Piano Mania. The simple $0.99 application merges education and entertainment by helping users learn how to play the piano through games. The team clearly outlined the competitors, product differentiation and showed the different layers of the app (the first level show the letters of each key, prompting the user to tap those keys, letters disappear as you graduate to the next level) and possible add-ons (two-player games, additional songs).

All in all, it was one night, a handful of pitches, for many apps that will never reach the market, but its certainly a step in the right direction.